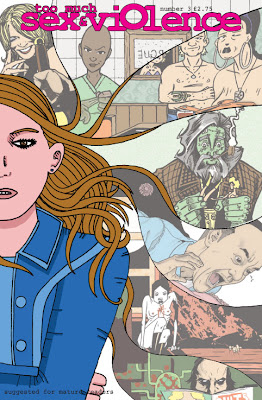 Too Much Sex & Violence #3 is out! I've got a couple of pages in there, and a slice on the cover, but what you'll really enjoy are the pages by Adrian Bamforth, Rob Wells, Stephen Prestwood, Nige Lowrey, Andrew Cheverton, Martin Eden and Chris Askham, and the writing by Rol Hirst. You can buy the comic here, either in good old-fashioned paper format for £2.75 or in futuristic digital for 99p.
Scrawled unintelligibly by thekelvingreen at 9:41 pm No comments:

Email ThisBlogThis!Share to TwitterShare to FacebookShare to Pinterest
Labels: comics, self promotion, too much sex and violence

I blame Rol and Chev, although the original is here.

I love Conan the Barbarian. Yes, it's not true to the original stories, but it's still an enjoyable film full of great imagery, an underrated performance from Ahnuld, and, yes, a wonderful bombastic soundtrack.

2) Do Androids Dream of Electric Sheep:

It's okay, but it's not one of PKD's best, and I prefer the film. That said, I'm not a huge fan of the film, so I probably lose any points I gain from owning the book.

Oh dear. I don't think I've seen a single episode of The Twilight Zone all the way through, although I think I saw the film and I've seen plenty of The Outer Limits. It's one of those things that everyone knows -- doo de doo de doo, "There's something on the wing!" and so on -- but it's never been on a TV channel I watch, so my only contact with it is second hand, like the Johnny Bravo episode with the corn field.

4) The Original Star Wars Trilogy – WITHOUT ANY ADDED CRAP:

Return of the Jedi was once my favourite of the series, and I quite liked the 1997 editions, but the only film I own now is Star Wars itself, even if it's the slightly crippled original Lucas hid away on the second disc of the re-releases a few years ago. So that's a third of a point, I think.

Nope. It had some very wobbly moments -- like the final episode -- but also some very good ones -- like the penultimate episode -- and wasn't anywhere near as bad as its reputation suggests. The other series were often as bad, and Voyager was often worse.

6) The Lord of The Rings Extended Edition, The Soundtracks and all of the books;

I have the books, of course. I have the first soundtrack and a couple of tracks from the other two. Of the films, I only have the first, and in its non-extended version, as I realised I didn't really like the longer versions of the other two and have never got around to buying the first one. So that's five-ninths of a point?

7) A Profound Sadness for the Way Battlestar Galactica Ended:

I don't know if "profound sadness" is the right way to describe my reaction to that insipid ballcocks. The first couple of series were so good and they threw it all away through a lack of discipline.

8 ) A Passionately Favorite Version of the REAL Doctor Who:

He's not called "Doctor Who". Tsk. Anyway, the best Doctor is always the current one and your favourite is always the one whom you grew up watching. That's probably too obtuse an answer to get a point.

9) A Fear That Will Smith Will Someday Star in The Movie Adaptation of Your Favorite Book:

Nope, Tom Cruise already did it.

10) Toys from Your Childhood That You Refuse To Part With:

I've already parted with them, although not from choice in most cases.

11) The Belief that the Word Midichlorian Was Just from a Nightmare and NOT a real Star Wars Movie:

Don't be silly. I know it wasn't a nightmare. That would be delusional. There was only one Matrix film however.

Tron was always rubbish. It had very clever special effects -- the achievement of which was undermined by the pointless sequel -- but that's it. Sorry.

13) An affection for the TV show Firefly:

Oh... it's not as good as its odd grip over science fiction fandom suggests, but it was okay and might have been brilliant a series or two down the line. "Affection" is probably strong enough, so yeah.

Nope. He didn't kill the Batman movies, Joel Schumacher did. I'd still watch Batman and Robin over Batman Begins though.

Like The Twilight Zone, I know these through other sources than the originals. I don't think I've read any Asimov aside from a couple of short stories at university as part of my degree.

16) You think Cheetara is HOT!

17) You Believe Aliens are our REAL Gods:

No. Except for Cthulhu, obviously.

18) You Have a Favorite Animated Cult Sci-Fi Movie:

Does Transformers: The Movie count? If not, Wizards must.

I'd like to be sensible and grown up and say it was Hasbro's fault, but yes, I do blame Hot Rod.

I don't despise Michael Bay. I blame Shia LaBeouf more, but I do wish Bay would leave the things I like alone.

So going back over that lot, I make my score six and eight ninths, or maybe seven and eight ninths depending on whether I can count the Doctor Who answer. I am apparently not as nerdy as I thought.
Scrawled unintelligibly by thekelvingreen at 7:37 pm 3 comments:

Email ThisBlogThis!Share to TwitterShare to FacebookShare to Pinterest
Labels: a lack of inspiration

Scrawled unintelligibly by thekelvingreen at 5:42 pm No comments: