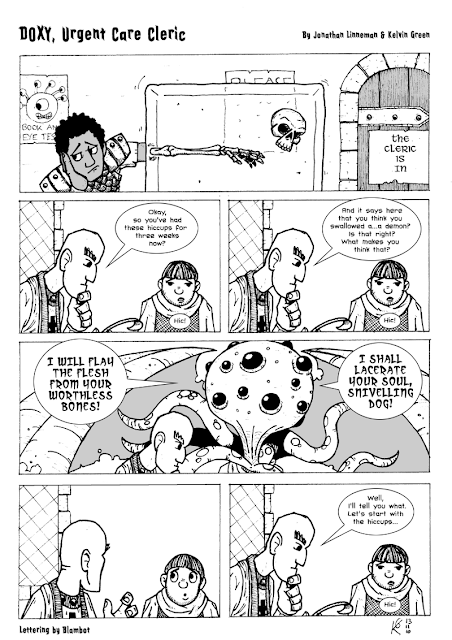 Email ThisBlogThis!Share to TwitterShare to FacebookShare to Pinterest
Labels: comics, doxy, Fight On, self promotion, stuff that I drew

I have been contributing art to the gaming magazine Fight On! for a while now -- I think it's been two years -- but so far it's been internal illustrations only. I'd never even considered doing a cover, in part because I'd not been struck by a good idea for one, and also because I didn't consider myself in the same league as the usual cover artists: 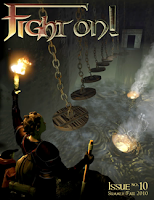 They're working on the eleventh issue right now, and the editor put out an open call for a cover image. The subject is to be something from the Runequest game, and one of the suggestions was the Crimson Bat, which is a kind of massive chiropteran Godzilla, flapping about and destroying everything in its path.

I can imagine it would be quite easy to come up with an epic bit of fantasy artwork to illustrate such a creature, but another quite different image sprang to mind instead. As I mentioned above, I've not had an idea push its way forward like that before, so I've gone with it.

While all the pieces above are very good, they're also all of a stock, illustrative fantasy style, and what occurred to me was something more "designy", iconic and abstract: 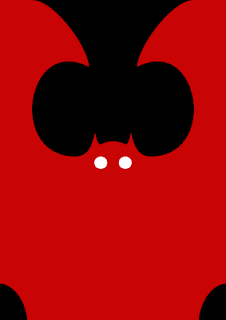 What I have in mind for the title and text is for it to go somewhere near the bottom, and to be plain white and unobtrusive, making the cover as a whole rather stark and simple.

The editor is unsure. He likes the image, but thinks the readership might respond in the negative, so he's not sure about making it the cover.

What do you think?
Scrawled unintelligibly by thekelvingreen at 5:41 pm 4 comments:

Email ThisBlogThis!Share to TwitterShare to FacebookShare to Pinterest
Labels: Crimson Bat, Fight On, kaiju, self promotion, stuff that I drew

I can't think of any films which would have been improved by being filmed in 3D.

I can think of a whole host of films which would have been improved by better writing.

I trust you can work out the rest.
Scrawled unintelligibly by thekelvingreen at 12:33 pm 1 comment: