Just Because I Can 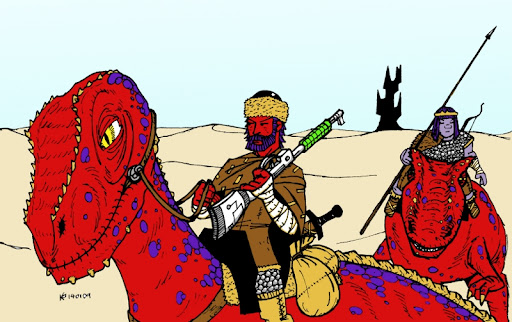 Scrawled unintelligibly by thekelvingreen at 9:44 pm No comments:

Email ThisBlogThis!Share to TwitterShare to FacebookShare to Pinterest
Labels: Carcosa, dinosaur, Fight On, self promotion, stuff that I drew 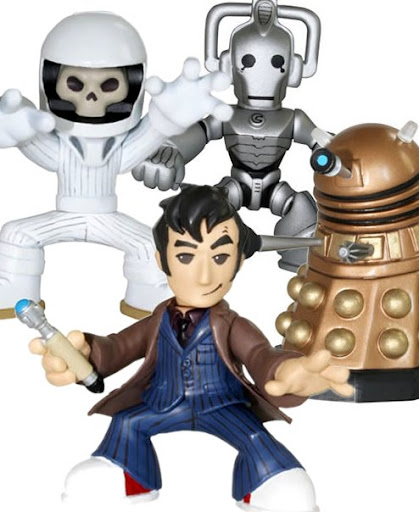 I would get the mini-Cyberman anyway, but the little super-deformed skeletal astronaut is wonderful.
Scrawled unintelligibly by thekelvingreen at 9:20 pm 5 comments:

I've often wondered (because I am sad like that) how film-makers come up with the names of their characters, particularly in action movies. I wondered if there was some focus group coming up with tough, macho style names to attach to the latest Van Dammage feature, or whether it's picked at random from the phone book.

Well, apparently, to legally use a name in a film, there either have to be no examples of that name in the US national phone directory, or at least five examples. I assume this only applies to American films.
Scrawled unintelligibly by thekelvingreen at 5:03 pm 2 comments:

In No Particular Order

I'm a bit behind here, but Pro Evolution Soccer on Wii is the best footie game since Sensi. Since the death of that venerable franchise, I'd basically been making do with the playable but dull FIFA and had been avoiding the Pro Evo series for no good reason; particularly foolish given the consistently good reviews bestowed upon the franchise. The clever new control system of the Wii version got a lot of attention, but still I resisted, until it was forced under the tree at Chrimble. It turns out to be quite brilliant. It plays completely differently to any footie game I've ever seen (but doesn't have to; it can be played in a bog-standard Fifa way if you want, but you're missing out) in the sense that you really do control an entire team rather than just one player. In the majority of these games, you have to rely on the AI to back you up when you go for a run, or try to put a cross into the box, but in Pro Wiivo, you can move any team member into any position on the field, make them move where you want, and so on, and it's nothing short of revolutionary. What Konami have done, essentially, is take the environment of a real time strategy game like Command & Conquer and slap it onto football, and it works wonderfully. And at £13 from Amazon (likely cheaper elsewhere too), it's also a bargain. I'm not very good at it as yet, but I'd be up for an online match; my Wii number is 7714 7295 2393 7107.

ITV are trumpeting their snagging of the FA Cup broadcast rights with plenty of billboard advertising. It's all macho nonsense based around an "in the FA Cup, all men are equal" tagline, and one of the posters shows a fireman competing with a Manchester United player for a header; it's a clear reference to the previous round where a postman knocked the once-mighty Leeds United out of the contest, but the unfortunate implication of the advert is that a man who every day risks his life to save the lives of others is somehow not as worthy as a bloke who's paid millions to run around a field for an hour and a half once a week. Nice work, ITV. Classy.

I have a beard. I had an ill-advised facial growth back in Sixth Form, but it looked like a tuft of ginger pubes and was quite the embarrassment, and I swore never to repeat that mistake, and yet... Back around Chrimble '07, a colleague grew a superb beard, a full-on North Sea fisherman thing, but his missus not-so-subtly suggested that he get rid of it by buying him a shaver as a gift. I detected the beginnings of new winter plumage sometime in November and urged him to keep it this year, pledging that I too would grow a Christmas Beard in support. Meg hated the idea at first, but now has become quite taken with my hirsuteness, and won't let me shave it off. Combine that with the fact that I haven't had a haircut in two months, and I'm starting to look like a feral Geography teacher.

And I was rooting for Paterson Joseph, but this fellow has a definite sense of the eccentric about him, so I think he could work. After all, I thought David Tennant was too young when they announced him, and he turned out okay. Incoming showrunner Steven Moffat's favourite Doctor was Peter Davison, again a youngster at the time, and he seems to have a good idea of how to make the young-but-impossibly-old thing work. All that said, I am a tiny bit worried that the producers will try to twist the show to make it more youth-friendly, but I'll give them the benefit of the doubt.
Scrawled unintelligibly by thekelvingreen at 11:57 am No comments:

By the hairy chin of Odin, it's been a while. Apologies. I'm sure there's something worth reporting, but I'll have to have a think about it. Tomorrow. In the meantime, this is what's making me happy right now:

Middle-aged German car designer fights multiple copies of himself using his powerful kung-fu. This is the kind of thing I missed when I lived in America; apart from during the Superbowl, they don't tend to do funny or clever adverts over there. Then again, I'm not entirely sure how the "beat yourself" message directly relates to the car being sold.
Scrawled unintelligibly by thekelvingreen at 1:07 am No comments: