Here's a piece commissioned for an upcoming issue of the Tékumel fanzine, The Excellent Travelling Volume: 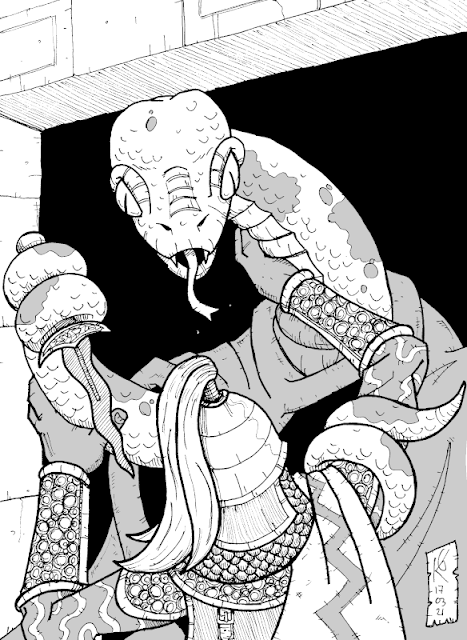 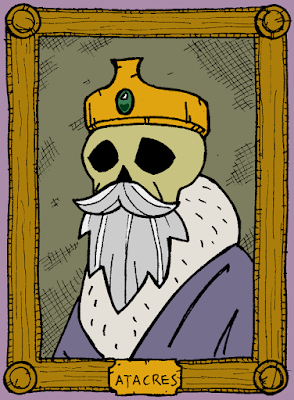 Atacres II was cursed by a wizard and never died. He has ruled for four centuries, because the laws of succession state what happens when a ruler dies, but not what happens if the ruler lives on past death, and since the king is the final arbiter of the nation's laws...

(Constitutional experts were surprised to discover that there is no law against undead heads-of-state. According to sages, it "just never came up".)

Atacres is over 400 years into his reign now, and his descendants -- the so-called "Rulers-in-Waiting" -- have had mixed opinions over the centuries. Revolutionary efforts have faltered because Atacres is, despite appearances, a fair and popular king, and trying to depose him based on his unfortunate... condition looks an awful lot like bigotry and prejudice, and everyone knows that a successful revolution these days is all about good optics.

That said, Atacres' relationship with his own state church is strained. The king is wary of clerics and paladins and will only grant audiences at a distance, or through intermediaries. One over-zealous -- pun intended -- holy man spaffing Turn Undead in the throne room, and all of Atacres II's hard work is up in smoke, or dust, or whatever the D on the Turn Undead table signifies.

The king's attitude to other undead creatures is complicated and evolving. He considers himself (un)living proof that not all undead creatures are soul-sucking monsters, but fears challenging his people's view of the walking dead. Rumours persist that he has held secret meetings with liches, vampires, and other high-functioning corpses.

That image of Atacres popped into my head one day -- probably a weird after-effect of The Event™ -- and I thought he had potential, perhaps as an unusual NPC, the sort of thing a D&D party would go try to kill most days of the week. There's probably also a bit of an influence from Steven Erikson's "friendly" lich Bursting With Wit, from Blood Follows.

In terms of game statistics, Atacres is probably either some sort of lich with no magical powers, or a beefed up skeleton with the charisma and intelligence of your standard rpg wise king archetype.
Scrawled unintelligibly by thekelvingreen at 10:32 pm 5 comments:

Email ThisBlogThis!Share to TwitterShare to FacebookShare to Pinterest
Labels: Atacres, NPC, stuff that I drew, stuff you can use 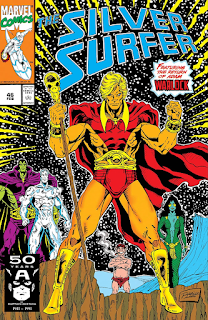 This should be nice and quick, because nothing happens. Well, sort of.

The Silver Surfer is trapped inside the Soul Gem, meets a bunch of other characters, walks around for a bit, and has an inconclusive chat with Adam Warlock. Meanwhile Gamora fights Drax in order to distract him so he doesn't destroy the Soul gem -- and everyone trapped within -- through sheer force of will. Or something.

At the time the comic was published, the characters the Surfer meets in the Soul Gem had not been seen for over a decade, and after such a long time it would probably be quite exciting to see them again. In 2021, when the same characters -- apart from Pip the Troll -- are, if not household names, at least well known through being the stars of a successful film franchise, the impact is somewhat lessened, and the actual weakness of the story is clear. The big selling point is the return of these characters, and without that there's not much going on.

Ron Lim's artwork is okay. The linework and storytelling are clear, but there's nothing that impresses or surprises. It's a good, solid, functional job, but it's far from exciting.

All in all, it's fine but stripped of its main schtick it just feels flat. Time has not been kind to Silver Surfer #46, and I award it just two Cables. 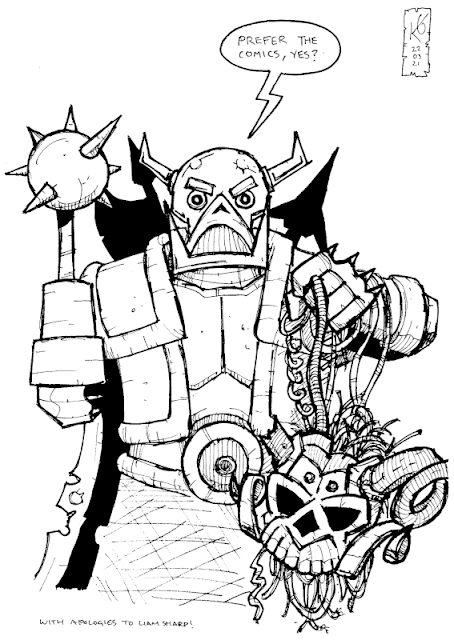 It's #DrawDeathsHeadDay again! And I almost missed it, again!

This is based, of course, on the cover of Death's Head II #1 from 1992, and the beheaded, er, Head, is the version of the character that apparently appears in the first Guardians of the Galaxy film, although I didn't spot him!

(He's one of the Collector's exhibits, I'm told.)
Scrawled unintelligibly by thekelvingreen at 4:47 pm No comments:

Oh dear. We have fallen very far behind with these. The good news is that of the seven issues I picked for February, all but two were either unavailable, or were comics I have read before so have been rejected on the basis that the whole point of this endeavour was to see what 1990s comics were like, which doesn't work if I've already read them.

No such danger here, as the only issue of Excalibur I have read before is the one where they go to the pub -- because Warren Ellis -- and this one is... very different. 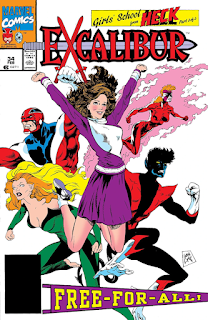 This is "School Spirit (or Cheerleaders from Heck)", so called because in the A plot, Kitty Pryde and her school friends travel to London to enter a cheerleading competition at half time in a match between the New York Giants and the British Yeoman -- "Britain's 1st professional 'American' football team" that never appears again, according to every wiki I can find -- because that's something that British schoolgirls do.

Although, to be fair, that is the sort of weird plot that would turn up in a British kids' comic -- school hockey team ends up at the Olympics by accident, that sort of thing -- although I rather suspect it is not a deliberate homage to Tammy or Jinty.

There is also a B plot involving the rest of the Excalibur team, Mesmero, and the Fenris twins, but it's somewhat forgettable and doesn't go anywhere interesting before it clashes with the cheerleading stuff later on. In fairness, this is billed as part three of three, so there was probably more of the Mesmero plot in the first two parts, but even so I imagine it's a bit of a limp ending to that story. On the plus side, I love the costume design of the twins, even if it is basically 2000AD's Zenith. Maybe I like it because it's 2000AD's Zenith.

This is Chris Claremont's final issue of Excalibur, which I was surprised to discover, because it feels a bit like a half-hearted fill-in rather than a grand finale. I would not be surprised to find out that Claremont was sacked, or got burned out, or some similar behind-the-scenes drama. The main plot, despite its odd, almost twee, feel, isn't bad but the rest is a bit naff, as if the writer lost all enthusiasm in what he was doing. There is also some... unfortunate scripting here and there; Claremont's attempt at an African-American voice is cringeworthy at best, and a schoolgirl asking Nightcrawler "Is that tail really prehensile?" is not something I imagine would be okay even in 1991. 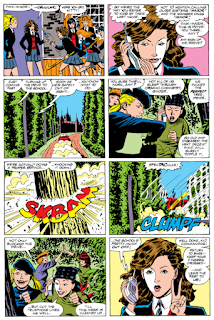 Art comes from Ron Wagner, who draws in an unexpected style that feels quite retro. Yes, I know the comic is from 1991 so it is, in fact, retro, but there's none of the contemporary not-yet-Image style here. Wagner uses lots of angular lines and sweeping curves, that make characters look almost like architecture than people. That said, there's an element of expressive cartooning in the storytelling and there's a lot of personality in the faces and body language. It feels quite European, which I suppose is appropriate enough, and I like it a lot.

(I wasn't sure I had read any Ron Wagner comics before, although the name was familiar, so I looked him up and discovered that he often got into trouble for "insertion of sexually explicit content into his backgrounds" on Morbius: The Living Vampire, which is quite funny. Oh, and it turns out he pencilled Spitfire and the Troubleshooters #3, which I have read as a back-up in Marvel UK's Transformers, and is probably how I recognise the name.)

I suspect this isn't considered a classic issue of Excalibur, and it's an underwhelming final issue for one of comics' most prominent writers, but it's not awful. I'll give it three Cables out of five.

Where It Is At

This is me a couple of weeks ago: 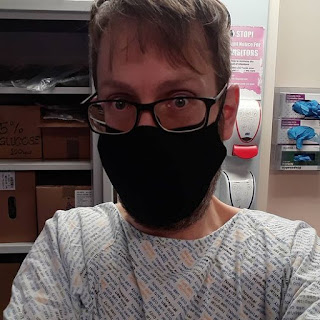 I was in accident and emergency, having been rushed there by the ambulance, after a mysterious seizure™. I had a previous mysterious seizure™ a couple of years ago and, after a barrage of tests, they couldn't say what it was or what caused it, but I was told if it happened again to call an ambulance.

So that's what happened.

Again, no idea what it was or why it happened. A repeated round of tests lies in my near future, so we'll see if something comes of those. I doubt there will be any answers.

It took about a week to recover, and then I was catching up with work missed during that week, so that's why blogging has slowed, and why we haven't done any February comics for Marvel 1991. Things are a bit more normal now -- I still have a bit of a fuzzy head and am occasionally confused by things that shouldn't confuse me -- so expect more content soon.
Scrawled unintelligibly by thekelvingreen at 1:37 pm 7 comments: 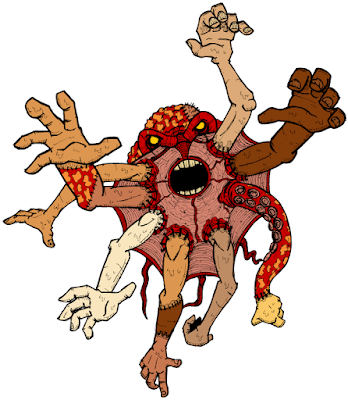 I may have posted a black and white version of this earlier, but I had to do a colour version so I thought I would post it.

Content has ground to a halt of late because of a bit of personal drama I may share in a future post. I hope to get back to stuff soon, not least the Marvel 1991 project, because that's slipping further and further behind!
Scrawled unintelligibly by thekelvingreen at 11:38 am 1 comment:

Email ThisBlogThis!Share to TwitterShare to FacebookShare to Pinterest
Labels: Huguenauts, Lamentations of the Flame Princess, stuff that I drew, Terror in the Shadows
Newer Posts Older Posts Home
Subscribe to: Posts (Atom)