From Hell's Heart, I Stab at Thee

Dallas M asked on the zombie social network that is G+ "What's your favourite B/X death condition? I usually do 0 = death."

The first thing that sprang to mind -- because there's something wrong with me -- was this:

At 0 Hit Points you explode, doing d6 per level damage to everyone within a radius of feet equal to your Constitution score.

It's more or less the Heart of Woe magic item from Warhammer, but everyone gets it because exploding player-characters are great fun and you shouldn't be stingy with fun.

Scrawled unintelligibly by thekelvingreen at 4:36 pm No comments:

Email ThisBlogThis!Share to TwitterShare to FacebookShare to Pinterest
Labels: stuff you can use 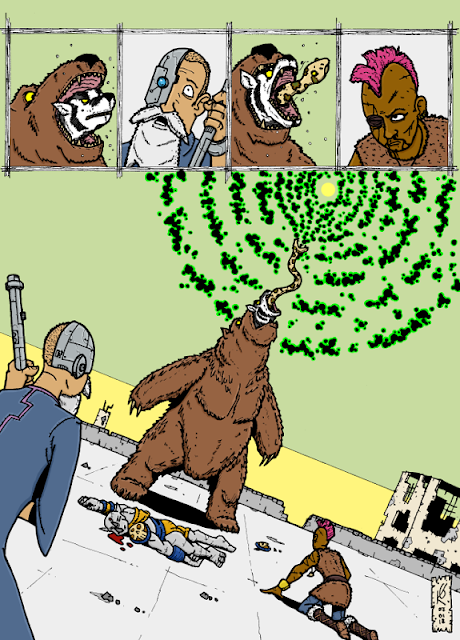 Scrawled unintelligibly by thekelvingreen at 1:00 pm No comments:

Email ThisBlogThis!Share to TwitterShare to FacebookShare to Pinterest
Labels: Barbarians of the Ruined Earth, bear, stuff that I drew

Here are some Germans talking about the adventure I wrote last year for Lamentations of the Flame Princess:

(This video is not safe for work, as it does mention the title of said adventure.)

Alas, although I did get an A in my German GCSE, that was twenty-two years ago, so I have no idea what they are saying. They are smiling, so I assume it's good.
Scrawled unintelligibly by thekelvingreen at 6:00 pm No comments:

Email ThisBlogThis!Share to TwitterShare to FacebookShare to Pinterest
Labels: CUFFS SHRIEK, Lamentations of the Flame Princess, NSFW, self promotion, stuff that I drew

Bruce WIllis Is a Ghost, Probably, but What Do We Do About It?

We are going to play Call of Cthulhu a bit later today; this is excellent news as it is my favourite role-playing game. It's modern day one shot, and our GM, Ben, has sent out a pdf handout to get us prepared.

The thing is, the handout has -- unless I'm way off, which is possible -- literally given the game away. I've been playing Call of Cthulhu for years and I have written a horror adventure or two in that time, so perhaps I just have the mindset for this sort of thing, but that raises an interesting question.

If I am right, then how do I play it? I think I probably know how to "win" the adventure, but my character isn't going to know that. Do I play him or her straight, even though if they were a character in a film I'd be tutting at the screen at their lack of insight? Or do I make out-of-character "hunches" and blow through the adventure's obstacles?

(There is another option: I could be wrong about the handout, but make out-of-character "hunches" anyway, leading to a series of hilarious mistaken assumptions. Call of Clouseau, if you will.)

I suppose this is a subset of the character knowledge versus player knowledge question that has been part of role-playing games since the beginning, but I've always seen that stated in terms of mechanics or monster statistics rather than genre conventions.

I'm playing in a few hours, so we will see what happens.

(Oh, and happy new year, everyone!)
Scrawled unintelligibly by thekelvingreen at 3:29 pm 2 comments: