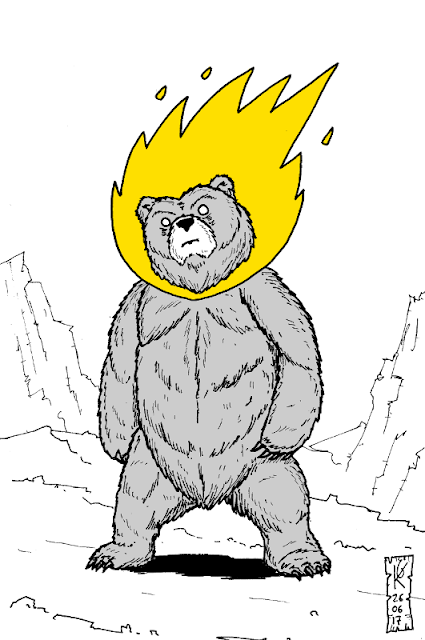 Email ThisBlogThis!Share to TwitterShare to FacebookShare to Pinterest
Labels: bear, stuff that I drew 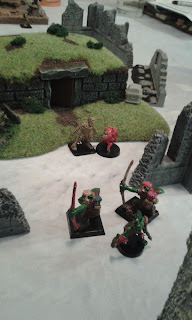 Somehow, despite it being one of those hectic weeks where nothing seemed to be going right, Stuart and I played a game of Mordheim Frostgrave on Thursday. You can see Stuart's summary of the game here and I think he overstates the scale of my victory; I scraped a 4-2 win but I rather suspect it should have been 3-3 or 4-2 to Stuart, because:


All in all, I think it was closer than the score or Stuart's account suggests and I suspect the next battle will be closer still now that we're both more used to the way the game works. I'm looking forward to that forthcoming skirmish as the first outing was great fun. You probably got that from the title of the post.

The mechanics are swingy, with lots of random events and tables, and that makes the game unpredictable. My orc barbarian -- one of the tougher types of henchman available -- charged into combat with one of Stuart's dogs -- one of the weakest types -- and managed to incapacitate himself, because the wide range of results on a d20 roll -- most miniatures wargames I've played use the less granular d6 -- lessened the impact of the barbarian's combat bonuses.

That's going to annoy some people but I like being surprised by the game, and it's not as if events are out of the players' control; for example, I lost an expensive warband member as a result of a post-game d20 injury roll but I wouldn't have made that roll if I hadn't thrown that character into danger in the first place.

I'm also fond of the wandering monster mechanic. It's an optional rule but I can't see myself playing without it, as it makes the city of Mordheim Frostgrave seem alive and it gives you something else to think about aside from what your opponent is doing; that clear run to the table edge could fill up with angry albino gorillas at any moment. 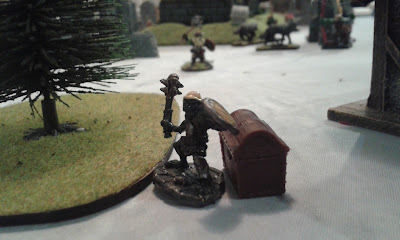 I also like that the game is about grabbing treasure, rather than killing off your opponent's warband. The latter is a valid tactic, but often not the best one; I found myself forced into doing so by Stuart's superior positioning, it felt desperate at the time, and I was lucky -- see above -- to pull it off. What's fun about going for the treasure is that it changes the tempo of the game; it starts off as a hectic scramble, but once the loot is acquired the game becomes more cagey as those carrying treasure are slower and less effective in combat. Furthermore, every gang member that makes it off the table with a treasure chest is one gang member you don't have available for the rest of the skirmish. As such there are distinct phases of play in a game of Mordheim Frostgrave and you have to keep them in mind when plotting your overall strategy.

There's a fair bit of complexity there, but it's all on the tactical side as the rules are super simple. Almost everything is resolved with an opposed d20 roll, characters have only a handful of statistics, and there are almost no special rules or exceptions. From my perspective it's a close to perfect mix; less maths and page-flipping, and more fighting and stealing!

My only real regret from the first game is that all of the treasure was at ground level -- aside from one chest that I suspected was an illusion created by Stuart's wizard -- so neither of us got to push anyone off a building!

As a result of the battle at the mausoleum Grotbag's gang has ended up with a big pile of gold, some spellbooks and a magic staff; the magic loot is, at this point, useless so will go into storage, and poor Snozzrot, the "mighty goblin sorcerer" took a dwarven axe to the face so most of the cash will go towards replacing him.

Grotbags herself is now a level three witch, having gained lots of experience points through frequent spellcasting during the skirmish. She is also getting on the Mordheim Frostgrave property ladder and is looking for headquarters for her warband. She's got her eye on an old wizard's laboratory, but the ruined First Metropolitan Bank of Mordheim Frostgrave also has fixer-upper potential.
Scrawled unintelligibly by thekelvingreen at 11:56 am 4 comments:

I was not expecting -- let alone intending -- to do this again so soon and it makes me feel a bit queasy, but here are some new things to buy if you have any money here in the middle of the month. 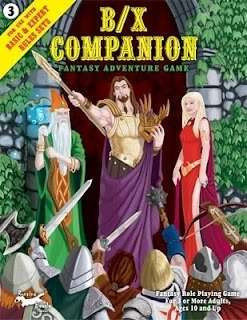 In the ancient past of 2011 I drew some pictures for JB's B/X Companion, a, um, companion volume to the classic Basic/Expert D&D rules. It was out of print for a long time -- only available as a pdf -- but there is now a limited number of physical copies back on sale. 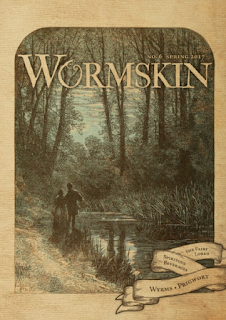 More recent and available in pdf and print is Wormskin #6, which contains the adventure "The Baker's Dozen"; I drew the maps for the adventure and went over the top with lots of fiddly detail. Again. 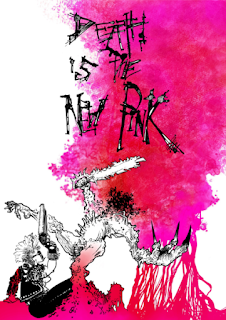 Also recent and also available is Mike Evans' Death is the New Pink, an apocalypunk rpg based on the Into the Odd rules and influenced by Borderlands and Tank Girl. Mike is some sort of machine, pumping out a new project every other month, it seems. You can tell the pictures I drew for DitNP because they are the ones that aren't as good as the ones Jeremy Duncan drew. Gosh, he's good.

That's your lot for now. I've got some other bits and pieces in the works but they are nowhere near finished, so with any luck it will be a long time before you have to put up with another of these awful and desperate money-grabbing posts.
Scrawled unintelligibly by thekelvingreen at 9:50 pm No comments: 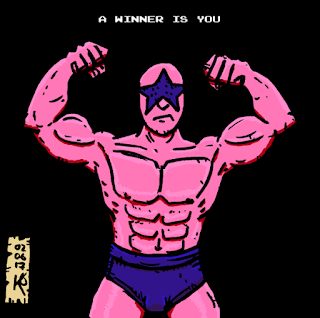 I suppose that means I lack the soul of a winner, I will never amount to anything, and if he were still alive, the Ultimate Warrior would be disappointed in me, but so it goes. Play on!
Scrawled unintelligibly by thekelvingreen at 9:51 pm 1 comment: