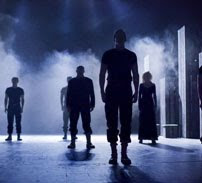 Best of all was that the show was completely free and open to all. The Pantaloons' mission statement is to bring plays like Macbeth to a wider audience, and to do that, they do not charge entry. They're also not funded through any source, so I don't know how long they can keep going, but I hope they do. There's a list of upcoming dates at their site.
Scrawled unintelligibly by thekelvingreen at 5:00 pm