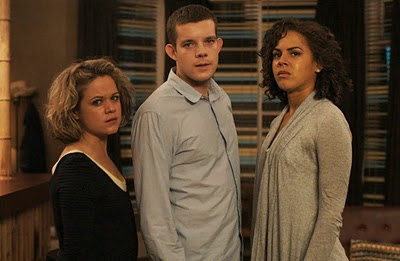 The producers of Being Human have always been good at putting together a finale, and last night's was no exception, going some way to making up for what's been a choppy third series. This series took a while to get going, with a fair bit of filler in the early stages, such as the zombie plotline that went nowhere, and the introduction of the teenage vampire Adam -- I have this suspicion that they're going to bring him back into the main show, or worse, import the whole junior Becoming Human team in some kind of ill-advised Defenders of the Earth type setup -- but it picked up again with the return of Herrick, long overdue following the second series' cliffhanger ending.

There were still some wobbly moments in this finale: Werewolf McNair Junior literally disappeared between scenes, Nina's life-threatening injuries were brushed under the carpet, and while of course George knew all along what Mitchell had done, the writers should at least have hinted at this being the case.

Still, it all came to an emotional finale reminiscent of the end of Garth Ennis' superlative Preacher -- and I'd love to know if creator Toby Whithouse is a fan -- with Mitchell being written out, at the hands of his best friend, as it had to be. There's been whinging already, and while Aidan Turner's Mitchell was a great character, it's difficult to see where they could have gone with him, and it was a brave move, I think, to have him give up and choose death. A lesser series would have had him try for redemption once again, and perhaps succeed, but Being Human is too honest for that.

(That said, I wouldn't be surprised to see him return once The Hobbit is wrapped; after all, Cassidy survived his demise in Preacher.)

So too, the werewolf-vampire-ghost dynamic, while not stale, had probably run its course, and I'm interested to see where they go now that the metaphor is changing from "twentysomething housemates" to "young couple expecting child", and how Annie fits into that; there were hints last series that she was more than a normal ghost, and they dropped a couple more in last night's episode, so that should give her something to do while they follow the werewolf baby storyline. I'd also be keen to see McNair the Younger return, but I'm not sure I could stomach it if they imported the Becoming Human lot.
Scrawled unintelligibly by thekelvingreen at 5:57 pm

Email ThisBlogThis!Share to TwitterShare to FacebookShare to Pinterest
Labels: Being Human, I review telly