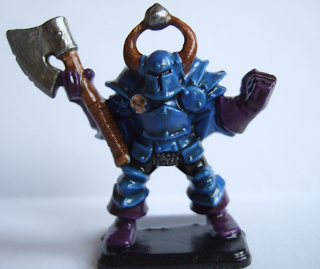 The previous session of The Enemy Within II: Money Never Sleeps ended in a cliffhanger as a band of marauders led by a HeroQuest Chaos warrior ambushed the party on their way to Middenheim. The group had heard stories of a vast Chaos horde rampaging through the northern half of the Empire and had seen Averheim's preparations for the war, but this was the first time they'd seen the face of the enemy. It wasn't long before they were kicking in the face of the enemy too.

Some very poor rolling on my part led to the marauders being somewhat less than effective as the dwarves soaked up the few attacks that did land and Rudiger and the elves danced about causing damage to the unwashed savages. Aside from a brief panic when the warrior spotted Aelric alone and unguarded at the edge of the fight and charged him, the most nerve-wracking aspect of the battle for the party was that the warrior's helmet was ruined by one of the wizard's lightning bolts and so wasn't able to be looted.

If you've read any Mark Millar comics it was akin to the limp resolution to one of his cliffhangers, except at least I wasn't doing it on purpose.

After that, the group arrived in Middenheim and were more upset about paying the one crown gate toll -- despite having the marauders' horses to sell for forty crowns each -- than anything else they'd run into so far in the campaign. Capitalist dogs, every one of them.

Once within the fortified city the party split up. Rudiger began investigating less-than-legal job opportunities in the city, while the dwarves rented a forge and spent a couple of days modifying the warrior's armour to fit Magnar, and Aelric headed off to the academic district to see if the not-at-all mysterious iron ring he'd found in the undead-infested barrow had any unusual properties. Rudiger made contact with a one-eyed fellow called Olaf, who promised to keep him in mind if anything lucrative came up, while the elf wizard played a series of chess games against the barman of a student pub -- his victories netting the party a one-off group Fortune Point -- and wandered about the Collegium Theologica, after a while bumping into Robertus von Oppenheim. 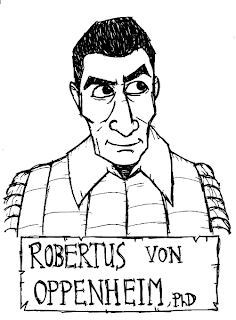 Von Oppenheim was the academic that they'd been sent to meet regarding the skaven bell clapper but before they discussed such unimportant matters Aelric asked the professor to examine the iron ring. In return von Oppenheim asked the party to organise a meeting with the priests of Ulric so that he could get access to the sacred flame of their temple in order to conduct his experiment on the clapper. The professor -- not much of a people person -- had been writing letters to the clergy but had not received any response to his requests; upon arriving at the temple and having to convince a corpulent clerk to arrange an interview with a young priest in order to arrange an appointment to access the flame, the party could see why, suspecting that Ulric was perhaps also the god of needless bureaucracy and that the letters were probably stacked on a desk somewhere in the depths of the building.

The group had some other business in the city. Back in Averheim, Aelric had been forced to sell an ancient elven heirloom and had heard it had made its way to Middenheim in the hands of one Johann Scheune, a name that seemed familiar to Magnar for some reason he couldn't quite place; they decided to not bother with that tantalising plot hook and instead went looking for the witch hunter Adele Ketzenblum, last spotted outside Talabheim, and a possible source of information on the party's apparent nemesis, the Black Hood. Ketzenblum herself proved as elusive as ever but the group did discover that she was presiding over a trial at the temple of Verena the next morning and made plans to return the following day, assuming the two dwarves didn't get too hammered -- ho ho -- in the meantime.
Scrawled unintelligibly by thekelvingreen at 8:30 am

Email ThisBlogThis!Share to TwitterShare to FacebookShare to Pinterest
Labels: games, report, stuff that I drew, The Enemy Within, Warhammer, WFRP