When we left them last time, the party -- Aelric the elf-mutant wizard, Magnar the iron-clad meat shield, Drandruel the wuxia wood elf, Rudiger the alleged vampire hunter, and Thorek the suicidal maniac trollslayer -- were roaming the Drakwald hunting for ingredients for a ritual that was hoped would cleanse the Chaos-tainted bell clapper they'd picked up in Averheim. They'd encouraged a pack of wolves to give up their skins and convinced a minotaur to donate his head and so, laden with bloody trophies, they headed back to Middenheim for the ritual. On the way out of the city they'd paid a local hunter to guide them through the forest but they'd sent him back earlier with professor Robertus von Oppenheim and so had to find their own way back; for some reason, despite growing up in the forest and, you know, being an elf, Drandruel had no ability whatsoever to navigate in the wilderness or follow a trail and the rest of the party were even worse off so it came as little surprise that they blundered around for a bit, until the sound of something huge stomping around nearby brought them to a halt.

Scampering up a tree, Drandruel spotted the head and shoulders of an enormous humanoid above the tree canopy just a few metres away from the party. There was a brief -- and hushed -- conversation as the group decided that they -- or rather Thorek -- were still a bit beaten up from their encounter with the beastmen and that they'd come back to deal with the giant later. Thorek of course wanted to deal with the giant then and there but wiser heads prevailed. Also, Thorek's player was absent and let's just say that when he's been at the table he's been role-playing the part of a suicidal dwarven drunk very well.

Rudiger sneaked up after the great beast and followed it to its lair in a hillside cave, making a note of the location for later, then the party carried on to Middenheim. Once again they were charged an entry fee and once again they grumbled about it but paid their dues; they had a plethora of adventure hooks to pursue in the city and I assumed we'd be spending a number of sessions there but I suspect that the high prices on almost everything put them off. I can't wait to see what they make of Altdorf, capital of the Empire.

The quivering lump of gore sometimes known as Thorek was dropped off with the priestesses of Shallya once more, along with yet another donation to the temple; they left the city before they could discover whether the temple's new roof would be dedicated to the dwarf. While their friend recuperated the rest of the party zipped around the city ticking off their To Do lists; the wolf pelts were booked in for urgent -- and of course, expensive -- preparation to be worn as cloaks during the ritual, the minotaur horn was given to a halfling herbalist for grinding into a fine powder, and Aelric went back to the Collegium Theologica to research giants and their habits. The wizard also tracked down the family heirloom he'd pawned for petty cash back in Averheim and its current owner, Johann Scheune of the Middenheim Marauders Blood Bowl team; it seemed that Scheune had given it to an elven maiden of his acquaintance in order to woo her, but the bitter and twisted Aelric cared nothing for the petty concerns of love and romance and convinced the footballer to return the bauble in exchange for a necklace of similar worth. 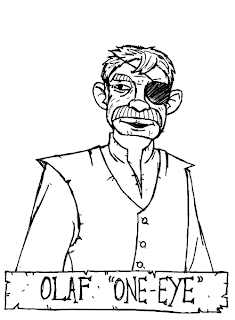 Later, in a tavern, Rudiger was approached by a bawdy woman with a moustache and an eyepatch who turned out to be Olaf, the gentleman of dubious employment history the thief-turned-vampire-slayer had asked about not-so-legal job opportunities a few days beforehand. Olaf told Rudiger that some friends of his had been arrested for a crime they did not commit and that their trial was in a couple of days; there was only one witness to the alleged theft and Olaf wondered if Rudiger and his friends could arrange for said witness to change his story. Rudiger and Magnar agreed; Aelric had got rather drunk by this point and lost track of the conversation, becoming fixated instead on Olaf's moustache and wondering if all human women had such voluminous facial hair.

The next morning, heads pounding just a little, the party went to the temple of Ulric to meet von Oppenheim and conduct the ritual of cleansing. The professor gave each of them a job to do during the ceremony: Drandruel was to stand at the doors and howl like a wolf, Thorek was to hold a stone goblet filled with wine aloft for the duration of the ritual, Rudiger had to walk a defined path around the temple with a lantern, Aelric had to hold the tainted clapper, and Magnar was supposed to guard the sacred flame of Ulric itself. All went well, aside from Rudiger finding his path blocked by a locked door -- only a minor obstacle as he'd stolen a set of temple keys days earlier -- and Drandruel having to fend off a drunken Knight of the White Wolf who thought it would be a grand jape to join her in her howling.

Oh, and von Oppenheim got burned to a crisp by the sacred flame when he thrust the clapper into it but given that the entire temple didn't explode and the clapper's taint seemed to have been removed, certain members of the party considered his immolation to be an acceptable outcome.

The party stuck around Middenheim until von Oppenheim's funeral, at which Aelric and the dwarves each spoke to varying degrees of embarrassment, then they left the city -- leaving Olaf's job unfinished -- and returned to the giant's cave. I'm not sure if giants in Warhammer Fantasy Roleplay are rubbish or if my rolling was poor but the closest to any sort of peril for the party came when one of the giants -- for there was more than one; plot twist! -- fell on Magnar as it died, but the dwarf is so tough at this point that he emerged from beneath the great brute unscathed.

On the plus side, Thorek struck the killing blow on one of the giants and so was at last able to progress to the giant slayer career. It is unlikely to improve his chances of survival.
Scrawled unintelligibly by thekelvingreen at 12:28 am