This is not me bragging about my miniature painting skills, for the simple reason that I have none; put a paint brush in my hand and I lose any coordination I may have had, my hands turning into chunks of unresponsive meat.

No, this post is about the exciting world of varnishing. All of these Rogue Trader era Dark Reapers were painted in the same haphazard fashion but were varnished in different ways. 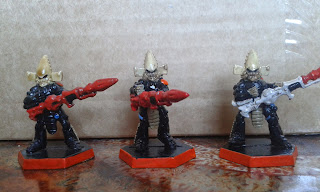 As I am a lazy and incompetent painter I thought that dipping seemed like a good idea as it would not only cut out the shading stage but would also varnish the miniature; it does indeed do both of those things although the dip itself -- I used Army Painter Quickshade -- is thick and difficult to control, resulting in some patchy shading, although it does produce a nice shiny finish. Mr Blotchy on the left was shaded and varnished in this way.

The middle miniature was washed with Army Painter Strong Tone ink -- I am told that it is a close match for the popular but discontinued Citadel Devlan Mud wash -- then varnished with Citadel 'Ardcoat. The shading isn't as patchy although the result is more dull overall and you'd probably want to apply a few quick highlights after the ink wash. The 'Ardcoat is easy to apply but varnishing an entire army with it is going to be expensive.

The Reaper on the right was also washed with the Army Painter ink and varnished with Pledge Multi-Surface Wax, which as the name suggests is for household use but seems to work for miniatures too. It's quite thin and not very waxy so I gave the figure two coats to get the same sort of finish, but you do get 750ml for £3.15 -- in Sainsbury's at least; other suppliers may differ -- whereas the 'Ardcoat costs £2.40 for 12ml. You can find out more about the Pledge -- including local variants -- here.

I am far from an expert on miniature painting -- exhibits A, B, and C above, your honour -- so I wouldn't expect anyone to take my word as anywhere near authoritative but it seems to me that a combination of ink washing and the Pledge Multi-Surface Wax is a much better -- albeit slower -- approach than the dipping I was using before.
Scrawled unintelligibly by thekelvingreen at 7:18 pm