Since everything had gone wrong, the agents of the Special Operations Executive decided to have one last go at finding the missing Lionel Malo before they attempted to escape Vichy France. They knew that the German occultist had been in the warren of caves beneath the valley and they also knew of an entrance to those caves on the land of the Toulon family; the agents did not have a good relationship with the Toulons and also suspected them of being cultists, so they didn't ask for permission and instead nipped over a wall towards the back of the orchard.

Mike McVeigh took the lead and peered into the dusk, searching for the hidden cave entrance he'd found the day before, with the rest of the agents following close behind, some less sneaky than others; Pierre-Yves Bertrand and Tidelina both blundered through the undergrowth but no one was alerted, or so it seemed.

McVeigh found the door and using some bolt cutters -- did they have bolt cutters in 1941? -- he'd borrowed from the Decharette mansion he broke through the chain holding the door closed. Before the group could enter the caves there was a howl from the trees behind them and a furry, hoofed figure leaped at McVeigh. 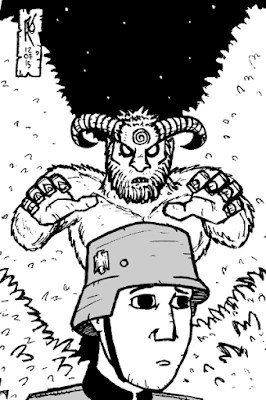 It looked half-human and half-goat, like the faun of classical myth, but with an alien, malevolent face, and the sight of it shook the agents' resolve; most held their ground but Fergus O'Brien's mind snapped and he started to howl and wail in response to the creature's own roars, while firing his rifle close to Kirby Tinkerton's ear and deafening the scientist. Oops.

Despite the panic -- caused more by O'Brien than the faun -- the agents focussed gunfire on the beast and after a worrying number of shots it fell to the ground. McVeigh beheaded the thing while the rest of the group attempted to calm the rifle-wielding O'Brien, so they were all occupied when another two of the horned monsters erupted from the bushes.

Tinkerton attempted to escape up a tree but lost his footing and fell into the path of a rampaging faun, but luck was on his side as the thing missed and ran head first into the trunk of the tree, stunning itself. Meanwhile McVeigh's patience had worn thin and he blasted the other faun with his MP 40; he emptied a third of a clip into the creature and converted it into a cloud of bloody chunks.

It was around this time that the agents decided that the Malo rescue mission was beyond their capabilities and they legged it; Tinkerton was the last to scramble across the wall and looking back, he saw dark shapes moving amongst the trees in pursuit. As the agents sprinted away from the orchard they almost ran into a German Kübelwagen coming the other way, no doubt to investigate the gunfire at the Toulon place; a few minutes later they heard bursts of automatic fire coming from the orchard and more than one of the agents expressed the view that the Nazis and the terrible goat things deserved each other.

They scrambled back to where they had concealed the Gestapo Kübelwagen and made ready to leave. While the others planned the escape route, McVeigh wandered off into the deeper woods and, once he'd made sure he was alone, he sang the song he'd been taught by the mysterious dapper chap from his dreams; McVeigh felt his vitality drain away, and he had a clear sense that something was coming to that spot, but there was no other immediate effect. Disappointed, he returned to the group.

They decided that crossing the demarcation line into occupied France and heading for a coastal town was too risky, so instead chose to drive the Kübelwagen south, over the Pyrenees and into neutral Spain; aside from a random German checkpoint and some rough terrain they made the trip intact and arrived in Madrid many days later, battered and exhausted. There the agents made contact with the SOE and arranged passage back to London.

Their superior -- codenamed N, which isn't suspicious at all -- was not pleased with the group's lack of success in either of its missions but acknowledged that it could have been worse, and they did at least have a faun's severed head to show for it. They were soon packed off to a secure location for debriefing and -- in O'Brien's case -- intensive psychoanalysis.

And that was that! Although one could argue that the players didn't do too well everyone seemed to have fun; we're going to take a break for a few weeks as various members of the group disappear for the summer, but World War Cthulhu has been enough of a hit that there will be at least one more mission for the agents of the SOE in the autumn.

I hear Norway is beautiful in September.
Scrawled unintelligibly by thekelvingreen at 6:06 pm