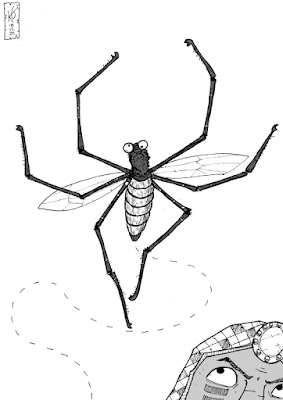 About the size of a chubby pigeon and twice as stupid, these giant insectoid* idiots are most common in the late summer and early autumn months. They are attracted to light, fly like they've chugged 13 barrels of ale, and seem to do everything in their limited, ungainly power to get themselves killed. How they manage to survive long enough to breed is a mystery that has baffled sages everywhere.

*(As any pedant will tell you, they are not true spiders. Ettercaps get quite exasperated if you mention them as they are a bit of a PR disaster for spider-kind.)

Fly my pretties!
Scrawled unintelligibly by thekelvingreen at 6:00 pm

Email ThisBlogThis!Share to TwitterShare to FacebookShare to Pinterest
Labels: flying idiot death spider, Lamentations of the Flame Princess, monsters, my monster manual, stuff that I drew, stuff you can use, Troika!