Bored of the Dragon Queen

Over the past couple of weeks my group has been playing the new fifth edition of Dungeons and Dragons. The plan was that I was going to run The Lost Mine of Phandelver from the starter set but Ben -- our group's regular game-master -- got excited when Wizards released Hoard of the Dragon Queen, bought it, and has been running that instead.

It is fair to say that I have not been impressed by the campaign so far. Well, to be honest, from my perspective as a player it seems a rather shoddy adventure, but as I haven't read the book I can't say for certain. If only Ben would write a guest post about his experiences running the game.

First there was the media buzz about this story….. and as Justin at the Alexandrian mentions in his review, it sounded initially like it would play like Masks of Nyarlathotep, as a node based adventure design….(and having run Masks this got me excited)….. plus many of us were excited by the possibilities/ hopes of D&D5 (simplified game design making it more playable and runnable than Pathfinder). On the latter- D&D5 is easier to run than PF – it wins.  But hell….on the first point, …. Has the adventure lived up to expectations? ……in short sadly no. Fortunately there is some online advice by Courtney Campbell at Hack and Slash which draws on some great material from Zak S as well on the sects of Tiamat. But it needs so much work to make it more exciting. Encounter design is weak, monsters are generic and all the same – nothing is learned from 13th Age critters or from dare I say it, D&D4 The Unmentionable encounter design. The layout of information is poor: npcs, story ideas are lost in the text: there are no side bars, a lack of boxing of text, no flow charts which could summarise how the rival factions of Tiamat get along or how they would respond to XYZ…..and no cultural information on the various new draconic races and their rivalries/ relationships/ culture (namely dragon claws and half dragons). Primarily it starts of in a silly fashion: PCs are railroaded into entering, at 1st level, a village under attack from an army and an adult dragon, and rescuing some villagers to then escort them through the village (not away) to the castle under attack from the dragon, and then be given missions GTA style from the Noble there (the art inside does not help here – instead of presenting him wounded and heroic, he looks like a toff, drinking and clean)…. And the railroad is never ending.  :/ 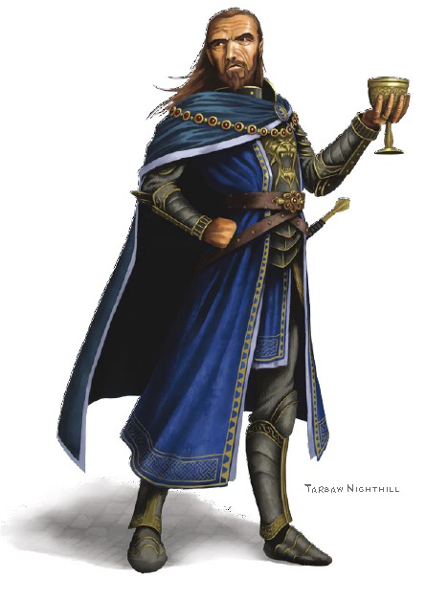 Entering a small town under siege from an attacking army of kobolds and cultists was a dangerous affair…..the players accepted their script (instinct was to flee)….and despite wanting to move refugees away from the carnage, they accepted the script to take refugees to the castle….. a few of them nearly died en route – it it dangerous at 1st level…. More so than in Pathfinder…. D&D5 like 13th Age and WFRP can be a little swingy. Then they met Lord Nighthill….the art jars with the scene/ moment… instead of being a man bloodied, wounded, looking like a war leader… he looks like a pompous toff with a deformed hand! Our gaming group are excellent at quickly spotting, and then calling such nonsense OUT…. Previous key npcs got immediately renamed/ laughed at… Nighthill was an immediate joke.

[The art shows Nighthill posing with a goblet of wine in one hand -- and a weird cube of flesh where his other hand should be -- so of course we imagined him doing the same; cue lots of in-character berating of the governor for getting drunk while his town burned down around him.]

The pcs did the GTA style side quests in Greenest, and with the aid of the random tables from Hack and Slash, there was more variety in the encounters….but given the fact there was an adult Blue Dragon flying about pulling its punches rather than levelling the town… it all felt a little contrived. Ditto the final part where Langdedrosa Cyanwrath the half-dragon (why didn’t the designers have a side bar/ boxed text on what the hell half dragons are, and their relationship to other draconic creatures (eg dragonborn)?) challenges a pc/ npc to a fight they cannot win. All felt too railroady. :/ Cornelius had a go (at this point Maya’s pc was a bard so the party’s only tank was the Halfling monk!)…and was reduced to negative HPs. He survived. Just. A meaner DM would have had him executed which would have been perfectly legitimate. :S

Ben will be back tomorrow with some more thoughts on the campaign. I have to agree with what he's said so far as the adventure seems to be jam-packed with staggering nonsense, like having to escort civilians towards the army from which they were fleeing in the first place. Even that is nothing compared to the rampant absurdity of the dragon cult's lair, but we'll leave that delight for tomorrow.
Scrawled unintelligibly by thekelvingreen at 7:55 pm