The Stars Are Right(ish) 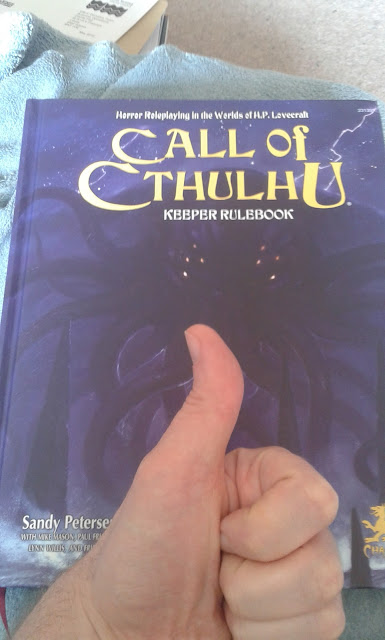 It is three years late but it's here, and it's a pretty book, perhaps the fanciest English-language rulebook Call of Cthulhu has had in its lifetime. The new Chaosium has done a wonderful job of getting the new edition released after the long and painful delays caused -- or at least mismanaged -- by the old Chaosium. It's a great achievement, it will bring much good karma Chaosium's way, and I am certain that this edition will be popular with the fans.

But I won't be playing it.

Call of Cthulhu is my favourite role-playing game -- I may have mentioned that before -- and one of the things I love about it is its simplicity. It's a light ruleset and the Chaosium percentile system is quite intuitive so there's little in the way of calculation involved at the table.

My preferred edition -- fifth, from 1993 -- has 42 pages of rules. There are lots of pages of mind-warping spells, eldritch abominations, and blasphemous tomes, but all the actual game mechanics fit into those 42 pages.

The new edition covers the same ground in 130 pages, 16 of which are for resolving that most Lovecraftian of events: the car chase. There are two flowcharts used for combat resolution.

Call of Cthulhu is an old game and it hasn't changed much over the years, so it was getting a bit creaky and needed cleaning up; I don't think anyone would deny that, but the way it's been done in this new edition has turned it into a game that is not for me.

This isn't a review or even a recommendation; it's more of an explanation why, when I talk about Call of Cthulhu in the future, it won't be the seventh edition. I wish everyone involved all sorts of success, but I will be sticking to my clunky yet reliable 1993 copy.

I suppose that makes me a grognard!
Scrawled unintelligibly by thekelvingreen at 10:55 am

Email ThisBlogThis!Share to TwitterShare to FacebookShare to Pinterest
Labels: Call of Cthulhu, games