This is the last of January's picks -- as sort-of-suggested by Calvin -- and we're a week away from the end of February. I am falling behind. 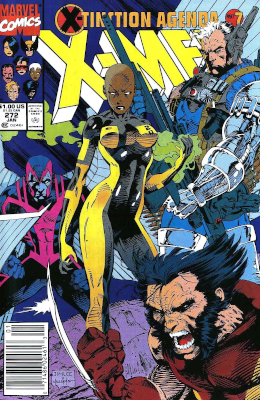 We are in part seven of "X-Tinction Agenda", one of those sprawling X-Men crossovers that seemed to dominate the 90's. The X-Men, plus some other mutants from other teams, are on trial in Genosha for... reasons. We'll get to that in a bit. Their powers have been disabled but even so, some of the mutants escape and begin a fight back. Some people change sides, and there's a gladiatorial fight between Archangel and Wolverine in there too.

Let's start with the art. There's some dodgy posing here and there, and at least one case of poor Psylocke suffering with a broken back, but for the most part Jim Lee does a great job, and I can see why everyone tried to copy him. His storytelling is dynamic and full of character, but what impresses me most is the level of work Lee puts in. I haven't done a mathematical study, but it looks like there's an average of about six or seven panels per page, and some pages have up to nine. Lee also doesn't skimp on backgrounds and while there are a handful of panels with manga speed lines, they are justified by the action. It's a bit weird to read, because every page is a clear example of what we think of as 90's superhero art, but there are very few of the flaws that are notoriously associated with that style. I'm not a huge fan of the general square-jawed blockiness of Lee's character designs, because I prefer something a bit more loose and wild, but in general this is a good looking comic, and that surprises me.

The writing is... less successful. Chris Claremont has a certain style to his scripting that I can best describe as "tolerable"; I can see why people like it, but it's not to my tastes. The plotting is a bit of a mixed bag; it is clear in the sense that I can follow what's going on, and for the most part event A leads to event B, and so on, but it's opaque in terms of why this stuff is happening. The first page is a series of talking heads about the situation, but it's more a bit of fluff to bring in some cameos from around the Marvel Universe rather than a proper recap. I would have used that to bring new readers up to speed.

(Yes, I know that to a certain extent it's my own fault for coming in at chapter seven of nine, but that's a poor excuse when someone could have picked this off the shelf in 1991 and be similarly confused. Everyone's comic is someone's first, and all that.)

Cyclops also does that annoying "We have escaped because I predicted you would do X, Y, and Z" thing and that's just bad writing. Unless it's played for laughs.

(Yes, that's me with no full-length published comics to my name, criticising a writer with a career spanning decades and millions of sales. Behold my lack of shame.)

Get in the sea, Cyclops, you crimson-eyed gimboid.

Uncanny X-Men #272 is a pleasant surprise. I've never been much of an X-Men fan and I've always been wary of the wayward crossoveriness of the franchise in the 90's, so I wasn't expecting much from this. Jim Lee does most of the heavy lifting, but all in all it's not bad. I give it three Jim Lee Cables out of five.

Right. So, that's January done. I've got a week left in February to do four comics. Onward!
Scrawled unintelligibly by thekelvingreen at 3:46 pm