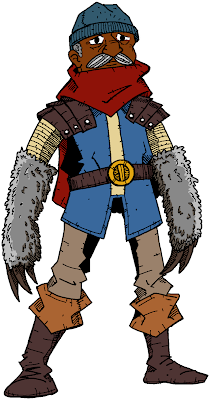 These furry, clawed, mittens are made from the arms -- forepaws? -- of a werewolf. They look somewhat ridiculous but can be surprisingly deadly. It is said that they were created by the infamous armourer Malarck.

The gauntlets do 1d4 damage but are bulky and unwieldy and make it impossible to pick up or manipulate objects.

The gauntlets detect as magical, and also as cursed, if such a detection ability is available in your game.

Work out what day the full moon is this month -- either in game or in real life -- or pick a number between 1 and 30. Every time a character puts on the gauntlets, roll a d30; if the number matches the day of the full moon, or the number you picked, then the following effects occur:


D&D-type Lycanthropy: Any character who loses half their hit points to the gauntlets in a single battle contracts the disease and will turn into a werewolf at the next full moon. Or you can pick a number and roll a d30 as above. Whichever is most fun.

(I have a text file on my computer containing weird names that I think I could use in a story or adventure one day. In there, for some reason, is "Werewolf Gauntlets". I see Mr Gauntlets as some sort of Victorian action detective, perhaps, but until then, you get this.)
Scrawled unintelligibly by thekelvingreen at 6:59 pm

Email ThisBlogThis!Share to TwitterShare to FacebookShare to Pinterest
Labels: games, loot, Malarck, stuff that I drew, stuff you can use, werewolf