The Inner Temple of the Golden Skeleton

Over at the resurrected Grognardia, James has shared an early Dungeons & Dragons map from Steve Jackson, co-founder of Games Workshop. This reminded me that the other co-founder, Ian Livingstone, now and then shares an image of one of his early dungeons. 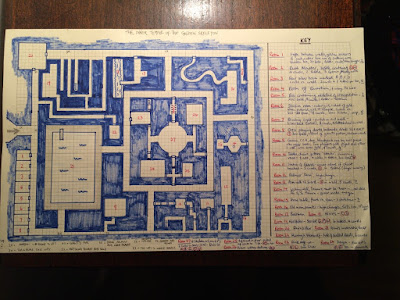 I can't be certain, but I think I remember Sir Ian saying that this was the first dungeon he ever designed for the game. I haven't been able to find a better quality image, and I'm too intimidated by Sir Ian's awesomeness to ask him for one.

(Not that I have any influence over such a giant! I don't mean to suggest that he and I are pals or anything.)
Scrawled unintelligibly by thekelvingreen at 11:21 am