One of my great pleasures is watching trashy late night television, particularly the terrible movies that crop up past midnight. Now, seeing as a great deal of the nonsense I enjoy comes from America, you'd think that it would be a paradise for me, but not so. There is a lot of late night rubbish on, but it's usually dating shows or those celebrity judge things. Rarely is it a bit of low-budget scifi programming or a crappy movie. Most of the time, in fact, it's those three-hour long infomercial things. Blech. But last night was a bumper crop.

I started off with The Ring of the Musketeers, which starred David Hasslehoff (complete with mullet and moustache), the blonde Nazi scientist from Indiana Jones and the Last Crusade, Cheech from Cheech and Chong, and some European fellow apparently cloned from Michael Bolton, playing the modern-day descendants of the Three Musketeers (and d'Artagnan). Assembled by Gimli (did he share any scenes with the blonde Nazi in Last Crusade?), who operates from a "castle" in the Los Angeles area which looks suspiciously like a hotel, they zoom about on motorbikes wearing matching frilly silk shirts and leather jackets (with TASSLES!), fighting organised crime in the musketeer way. Except there's no swordfighting, and certainly no musketeering, so they're not particularly musketeery. As you can probably tell, it was utter bobbins, but exactly the kind of stuff I enjoy in my trashy cinema; an utterly bonkers concept married to really dodgy production values. There was one bit where there was one of those fades that implies a stretch of time between scenes, but the next scene had the characters standing in exactly the same positions, as if musketeers have the magical ability to stand motionless for hours on end as they wait for gangsters to appear from nightclubs. Also, the big villain of the movie was killed, off-screen, by someone with no connection to the musketeers at all, a finale which must violate some law of plot construction. 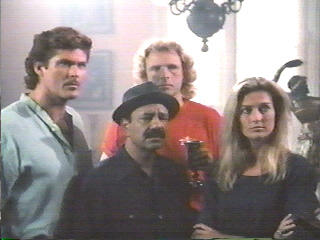 Because being a musketeer is my passion, and a life without passion is no life at all. - wise words from David Hasslehoff as John Smith d'Artagnan

I hung around after that in the hopes of more rubbish, but instead got the beginning of some three-hour epic about a hellish device that bleaches your carpet, so I hopped, and found Robocop 2 showing on a local channel! Hurrah! American telly scheduling is very odd to an outsider, and one of the strange quirks is how channels show movies; if a network has paid for the rights to show a film, they're damn well going to make sure that they get their money's worth and that the maximum number of people possible will see their acquisition. In practice, what this means is that the same film will get shown again and again in a short period of time; about a year or so ago one of the channels was showing Star Trek IV: The One With The Whales once a week for about three months. Anyway, Robocop 2 was on a couple of weeks ago, but for whatever reason I didn't watch it then. But I wasn't going to pass up such a sweet deal twice in a row! Oh no!

[UPDATE: as if to illustrate my point, The Ring of the Musketeers is on again this afternoon! Except it's on a completely different channel to the one it was on last night. Bizarre...]

I remember Robocop 2 being utter codswallop, which is why I was so pleased to see it on, but in fact it's a lot better than I recalled. As any fule kno, the original Robocop might look like an overly violent 80's American action movie, but in actual fact is also a biting satire on 80's America. Notice I said "also", because Robocop really is an overly violent 80's American action movie, just one with a brain. The sequel isn't as satirical as the original, but it's actually quite clever in its own way, and surprisingly subtle about it. It's also a much better action film than its predecessor, perhaps because it's much more honest about being a superhero movie. The original Robocop is quite obviously a superhero origin story (and incidentally the best Judge Dredd film that never got made) in terms of plot, but never really feels like a superhero movie, which is probably why most people don't recognise it as such. But Robocop 2 doesn't act coy about it and offers up some top-notch superheroic action. Which shouldn't come as a surprise, given that it's written by Frank "The Tank" Miller, he of good-Batman, good-Daredevil and pretty-much-consistently-good-Sin City fame. It's top-notch stuff, and as such probably shouldn't be counted as late night trash at all. It makes me wonder whether Robocop 3 (also written by The Tank, and featuring FLYING ROBOT NINJAS as I recall) is as bad as I remember it being.

After that, I was prepared to turn in, but the same channel followed up with an episode of Magnum, p.i. and you know I can't turn that down. It was from the seventh season, and I don't think I've ever seen an episode from that late in the run (I left Blighty before Channel Five got that far, and Channel 45 here shows them in a weird order, and at weird times apparently). The episode concerned an ex-cop's quest for revenge on the murderer of his eight-year old granddaughter, and it was dark. I don't expect an episode with such subject matter to be a barrel of laughs, but still, I don't think I've ever seen an episode of this show that's so grim. Most of it was filmed at night, in seedy neighbourhoods, with a soundtrack that had a dirty grimy feel to it, and the whole thing came across as really nihilistic. Still a good episode though, and the ex-cop was played by a thuggish Frank Sinatra, which was a bit bizarre.

On to less trashy stuff now, and gosh, I'm a lucky little boy! Not only is the best Batman film finally being given a special edition, but I found out this week that Transformers: The Movie is getting a special edition release too! Huzzah! There's a lot of talk over the technical specifications of the video transfer on this dvd because apparently the original film, although it was intended for cinemas (where I first saw it as a wee nipper), was made in a 4:3 aspect ratio (that's the almost-square shape of most tellies). That's just so strange and bizarre that I'd like one of the filmites (James? Liam? Monsignor Nagl?) to explain why that might be.
Scrawled unintelligibly by thekelvingreen at 7:13 pm