The party tried to shake the sleep from their heads as the mysterious black-clad figure mistimed its jump and landed with a stomach-churning crunch on the cobbled street below. Whatever was beneath that ragged black cloak did not rise again.

The two dwarves noted with some alarm that both the box containing the now purified bell clapper was missing. Peering down the street they espied a group of small, agile creatures lit from behind by a dull green glow that seemed somehow familiar, and behind that something larger and altogether more ominous lurking in the shadows. 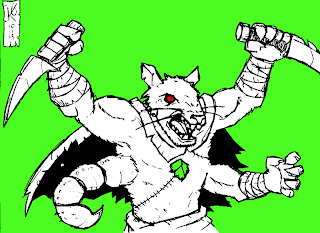 What followed was a mad scramble as the party split up and engaged the mysterious enemies who -- of course -- turned out to be the dreaded rat men they'd encountered back in Averheim. Magnar and Rudiger sprinted downstairs while Aelric and Drandruel took up positions by the open window to provide covering fire. Thorek... well Thorek attempted to emulate Drandruel's wuxia antics from the last time they'd run into the skaven and leaped out the window to engage the four-armed mutant that had given him so much trouble before he'd become a giant slayer, only to fluff the manoeuvre and land hard on his face, shattering a number of his giant slaying teeth.

Rudiger fell to his knees clutching his side after an encounter with a gutter runner's poisoned blade and was a skaven's whisker from needing to spend a Fate Point to survive the battle, while Thorek again took a beating. Even though the elves were doing a good job of picking off ratty snipers -- Aelric's lightning bolts in particular proving to be quite destructive once again -- things were not looking so good on the ground as the strain of the party's long and difficult journey from Middenheim began to take its toll.

As such it was a bit of a surprise when the skaven sorcerer threw the bell clapper to the ground in apparent disgust and vanished in a puff of acrid green smoke; although his minions held their nerve for a while longer, with their leader gone the fight turned against them. Scooping up the clapper and the two boxes, the party returned to the Red Empress inn and settled in for a few days of solid bed rest; Poddo earned his share of the party's takings over those few days, and no mistake.

After a while, the party dragged themselves out of their beds and went to visit Rudolf Bruer, the head of the village -- on their way passing a number of villagers commenting on the unusual lightning storms of the night before -- to ask about the monster they'd heard about on their first day in the hamlet. He offered them twenty gold crowns if they could bring back the head of the Beast of Krankendorf and as greedy opportunists public-spirited individuals they agreed to plunder the hamlet's coffers save the good people of the village from the hellish thing.

First they attempted to find out more about the creature and tracked down a number of witnesses, none of whom could quite agree on what the beast looked like; it seemed that the player-characters were looking for something that had wings, horns, one or more glowing eyes, and flew around on a cloud. A search of the settlement revealed that there were large, monstrous tracks outside the village wall and none within the boundary, but the damage to the wall seemed to have come from the opposite direction. Puzzling over these contradictory clues, the party retired to the Red Empress and spent the rest of the day there planning their hunt.

Magnar and Poddo took the first watch that night and were soon alerted to cries of alarm from near the wall. A bank of thick fog enveloped the land just outside the wall and in that cloud there was a bright orange glow, like a single fiery eye; Aelric let off another lightning blast at the eye, prompting a furious roar from somewhere in the mist. The party pursued and found themselves picking with care through treacherous marshland; not enough care it seemed, as both Magnar and Rudiger fell into deep waters, the latter almost drowning after a number of ineffectual rescue attempts from his companions.

Wet, cold, and tired they were as they came to firmer ground and a small clearing filled with the eerie mist. Something roared and before they knew it the party were in hand-to-hand combat with some winged, spiked beast but they also seemed to be the target of some hidden archers. After a brief scuffle, Aelric once again split the air asunder with a bolt of magical lightning, severing the head of the creature, and sending the archers running off into the marsh. Close inspection of the monster revealed it to be a bear clad in spiked armour with wings made of wood and leather; the mist was in fact smoke issuing from a pair of censers attached to the armour and the poor animal seemed to have been drugged. One of the archers was captured and dragged back to the clearing and explained that the whole thing was a scam and that he would have got away with it if weren't for those damned adventurers.

In an unusual display of compassion the party let the conman go after he promised not to do anything of the sort again and then they returned to Krankendorf with the head of the Beast.

The next day the party hopped back on their barge and watching the riverbanks with suspicious eyes every inch of the way -- I can't imagine why -- they travelled on to Altdorf, the capital of the Empire. So relieved were they to be in civilisation once more that they didn't even mind paying the hefty toll to enter the city. They bid farewell to Yan and Yan, booked themselves into the Wayfarer's Rest, then went shopping.

While out and about they discovered that not only were Marcus Baerfaust and Konrad Mauer in Altdorf as expected, but so too were Clothilde von Alptraum and Friedrich von Kaufman. After a bit of egregious metagaming -- of which all involved should be ashamed, boo, hiss -- the party decided to keep an eye on these key personalities -- some of which they considered to be friends -- as one of them was bound to be The Enemy Within. Tsk.

While the two dwarves went out drinking with Poddo and Rudiger hid in his room having developed a fear of going anywhere ever in case he got stabbed again, Aelric and Drandruel visited the taproom of the Wayfarer's Rest and bumped into none other than Clothilde von Apltraum herself. She had sought her friends out upon hearing they'd arrived in the capital and had come to ask them if they could help in the reopening of a play that had been closed down due to missing props; an odd request but Aelric was keen to please von Alptraum and so signed the party up without hesitation.

The mutant elf wizard also spotted another familiar face in the crowd, an elf he'd known from Marienburg. Although the other elf also recognised and acknowledged Aelric he soon left the tavern in disgust at the performance of Great Oozelli, a Tilean artist who put the "trump" into "trumpet". The wizard found this encounter puzzling but paid no more thought to it until next morning when an anonymous letter arrived claiming that Frederick Grosz -- who they hadn't seen since Averheim and who was supposed to have gone to Nuln to live a crime-free life -- was not only in Altdorf but had kidnapped the elf from the night before.

Scrawled unintelligibly by thekelvingreen at 8:11 pm