Still Bored of the Dragon Queen

Yesterday my good friend and occasional game-master Ben told us a little bit about what he thinks of Wizards of the Coast's new campaign for their new edition of Dungeons and Dragons. Today he tells us about chapters two and three, in which the quality improves to such an extent that Hoard of the Dragon Queen can be counted alongside Masks of Nyarlathotep and the first two thirds of The Enemy Within as one of the greatest role-playing campaigns ever written.

I am dissembling of course. It's terrible.

Episode 2 – scouting the cultist's lair and liberating the prisoners.

I skipped the part at the start of this in which a disciple of the captured monk gives the pcs a quest (the disciple has a boxed text to be read out whilst Nighthill has no scripted words) since the pcs already had been given the mission from Nighthill. Instead the pcs would see the poor monk (whom I had crucified – it wasn't clear in the text – but it was from the art) and seek to liberate him. 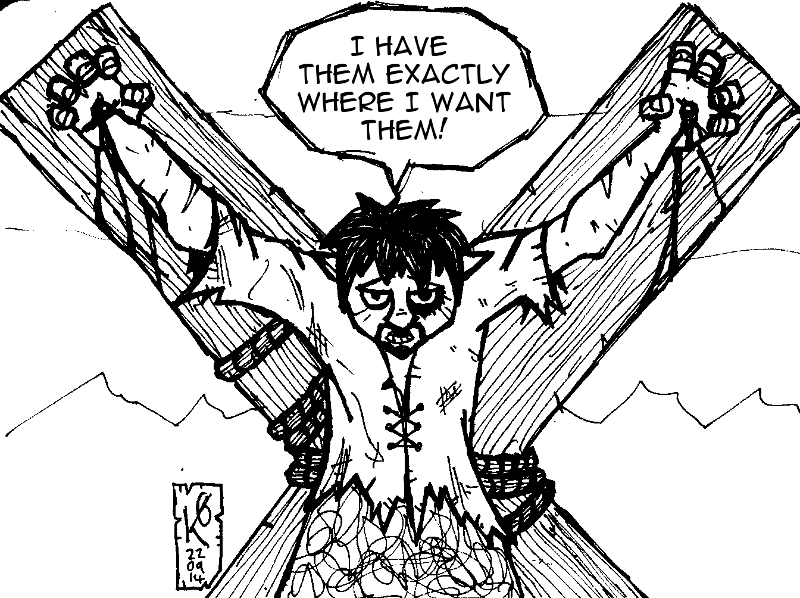 The pcs had captured a cultist in Episode 1. Between interrogating him, and the robes of dead cultists, they developed a plan to pose as cultists to enter the camp. They eliminated the rear-guard stragglers of the cultist army and got some new robes.... And at the "gate" bluffed their way in on their wagon. Their ruse was to be posing as cultists who were collecting the prisoners for the sacrifice. It involved Pythonesque dancing and singing to "All Hail Tiamat", drawing on the fact Manoj’s pc Lorseen Liadon had chosen "Cult of the Dragon Infiltrator" as a background which meant he had infiltrated the ranks of the Cult of the Dragon previously, spying on the organization for quite some time, giving him some familiarity with its inner workings and customs.

As a result he had developed a second identity as an initiate of the cult, enough of a facade to blend in as a simple grunt or servant. This was roleplayed to the hilt. We had a great hoot with the pcs entering the cultist camp, spreading malicious rumours to different "wings" (sects) of Tiamat (blue, black, and red sects were encountered)....in an attempt to sow seeds of discord to foment internal strife and do the party's job for them (which they think should earn them xp whenever a cultist is killed by another as a result of their ruse!)....They managed to bamboozle the dragonclaw guards (it would be nice to have some blurb about dragon claws too – their culture, how they relate to half dragons, dragonborn, kobolds etc)....the guards are bamboozled by the pc's bluster, sending them off to clean their livery and polish their weapons, liberating the prisons, knocking out the whingers, and hiding the malcontents within the covered wagon, and having others up front.

They then travelled to the crucified prisoners and manage to get them down in the twilight and vamoose. They take out the gate guards and plant some torn fabric from a rival claw of Tiamat on the dead cultists.... To help fuel tensions they have tried to exacerbate in their brief visit. Officially the monk was meant to tell them "Leave me alone, I have it all covered....don’t rescue me or you will spoil my cover and my master­plan to spy on the cult" which I told the guys....memories of the Black Knight "come back here and I will bite your legs off"... "it's only a flesh wound".... With the monk absconding later despite being tortured and reduced to near­death....the PCs return to Greenest and report, and ker­ching they level up to Level 3!

[We had great fun with this section of the adventure. Once we'd established that the cultists used an elaborate series of hand signals and body movements as their secret greeting we decided to use that to our advantage and spring surprise attacks on them while they were busy gesticulating; Ben didn't have to let us get away with that -- and I suspect that the text of the adventure wouldn't allow it -- but he was having as much fun as we were.

The crucified monk was also hilarious but for all the wrong reasons. I can't believe nonsense like that got into a published adventure, let alone the first major adventure release for the new edition of Dungeons and ruddy Dragons.]

The PCs are asked by the monk Leosin to enter the cave complex at the back of the camp and if possible steal the dragon eggs if they are still there. He is aware the bulk of the army will move on but that the eggs will be left behind, guarded, since they are close to hatching .....though later we discussed the import of them hatching/not hatching for the purpose of the plot.... The Draconomicon I finally referenced today tells me it takes a wyrmling from a hatched dragon egg 100 years to mature into an adult dragon.... 100 years – an immediate tipping of the scales (boom boom) in favour of dragonkind!

This was our first "dungeon­bash" in D&D5. I didn't let their ruse as cultists work – not being of draconic origin, they were attacked throughout the complex. I made the entrance to the chief npc area a secret door thus the pcs were funnelled into the fungi forest, bat/stirge area... It was not described in an atmospheric fashion.... And it didn't make much sense.... Why have your larder so close to the stench of the rubbish, as well as the stirges and violet fungi? It didn't!

[Ye gods, the dungeon. You know those first dungeons you made back when you first started playing when you were ten or so? The ones that made no sense at all but were still great fun? The cultists' temple complex was just like that, except without the fun bit.

Well no, that's not fair. It was fun, but only in the sense that we had a good laugh about how dangerous it must be to be a cultist of Tiamat. Who decided it would be a good idea to trap the curtain in the doorway to the larder? Has there been a spate of food thefts? How do the cultists even get in and out of the temple when the second room is full of homicidal fungus?]

The pcs slogged their way through the combats. Maya's pc had been changed after Episode 1 from a bard into a sword and board fighter – giving the party a "face". Which was just as well – since she was able to act as a blocker in combat. Sleep is still a really powerful spell at 1st level - taking out hordes of kobolds within the complex. The fight later in the Temple to Tiamat was more deadly. The blue half dragon Langdedrosa Cyanwrath and his 3 berserker henchmen dragonclaws (I made them draconic creatures) were a tough drawer for a resource depleted party... yes they had taken a short rest prior to the encounter... but still it was nearly a lethal encounter ....I opted not to use his breath power.... Otherwise it would have been curtains for the pcs... the first few rounds were brutal until Cyanwrath and one berserker were taken down.

Time was short after a late start that evening thus the dragon hatchery was run as an atmospheric encounter and no fighting happened there.

On to the trail of the cult....and trying to sandbox that as far as is possible!

On the positives ­ am liking D&D5 a lot overall. Need more variety in the monsters. Am hoping the Monster Manual does to critters what the 13th Age one does - making each unique (13th Age Kobolds RAWK! whilst so far in D&D5 they are so LAME!).

HotDQ....? Whilst having some hidden gems, it leaves a lot to be desired coming from professional game designers. It needed a serious playtest.... And really – I would have been far happier with a softback adventure with more depth/help and advice, a better layout, and no railroading! Some decent playtesting should have thrown up some serious problems with the design that should have been fixed before publication. I was despairing earlier in the week but now have worked out a way to make it work by the next session on Friday. Am very glad for the help so far from Hack and Slash – however I am now over­taking the blog's write up! ARGH!

I like D&D5 too and I think it's a great shame that the first major adventure release is so poor. Not only is it full of nonsense like the crucified monk or the absurd deadliness of the cultists' hideout, but there are lots of instances of invalidating player choice, like having to escort refugees into danger for no good reason, or Cyanwrath's twin brother turning up to read his lines if the players manage to defeat Cyanwrath himself. It doesn't seem like the adventure was playtested at all; I rather suspect no one read it before publication either.

I have read worse adventures than Hoard of the Dragon Queen but I think it may be the worst I've ever played. To be fair we have enjoyed playing it but it's only because we've been subverting and ridiculing it as we go and if we took it seriously I suspect it would be a miserable slog. It is a terrible, awful adventure and it should be avoided.
Scrawled unintelligibly by thekelvingreen at 12:16 am

Email ThisBlogThis!Share to TwitterShare to FacebookShare to Pinterest
Labels: Dungeons and Dragons, games, guest post, Hoard of the Dragon Queen, review, stuff that I drew