Chaosium was clearing its warehouses at the end of July -- some bargains seem to be available still! -- and I decided to spend some royalty money on H.P. Lovecraft's Dunwich for Call of Cthulhu. I'm not sure why I picked that one out of everything available, but I'm glad I did. Allow me to tell you why. 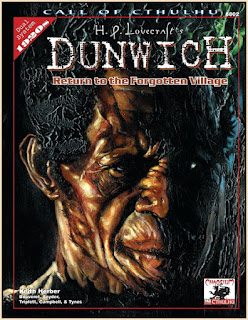 The Bad
The Ugly

That looks like more bullet points for Ugly than Good, but worry not! That first Good point is such a... good point that it more than makes up for the flaws, and most of the issues with the book can be fixed with ease, or ignored without making the adventures more difficult to play.

(I would go into specifics on said fixes, but, you know, spoilers.)

I remember seeing the original Return to Dunwich book in the collection of my old Call of Cthulhu GM Keeper Dave and that cover jumped out at me even back then. For whatever reason we never went to Dunwich in Dave's campaign, but I hope I'll get a chance to run it one day, as it seems like great, degenerate, backwoods, fun.

Scrawled unintelligibly by thekelvingreen at 4:56 pm