DLC for the FF GBs 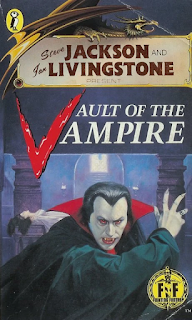 While there we went to whatever the Canadian equivalent of a charity shop is, and I was excited to find a bunch of Fighting Fantasy gamebooks. I managed to plug a couple of gaps in my collection, and found a second copy of Blacksand! to probably sell, but alas even in the realm of dreams Allansia eludes me, which probably says something about my sense of self-worth. I also discovered that Vault of the Vampire is called Vault of the Vicar in Canada, no doubt to some obscure Canadian law about promoting vampirism, or a general Canadian fear of the clergy perhaps.

The most interesting find was a series of short, 30 to 50 page books that were designed to be used in conjunction with the main FF adventures, as side quests of sort. They had GREENSPINES and everything. The main books would be edited to add something like this:

You now have the opportunity to embark on a sidequest. Select a book and turn to 1. If you survive your sidequest, follow any special instructions there, or return here to continue on your adventure.

If you would rather ignore the distraction of another quest and continue on your journey, turn to 87

Would this work in practice? I remember there being a disclaimer in the shorter books warning against the potential imbalancing effect of sidequests on the main book -- again, that tells you something about my subcosncious -- but it seems like a viable idea, a sort of analogue DLC to make replays of one's favourite FF adventures a bit more unpredictable and interesting. You could tailor the digressions so that they would be suited to certain books over others, both in terms of game balance and setting, so you don't suddenly end up fighting a bunch of medusae on a pirate ship or whatever.

(I suppose in theory you could do this with the existing books. Start Caverns of the Snow Witch, then interrupt it to play Moonrunner, then jump back, although that seems clunky and excessive. If you paired up the right books it might just about work. Hm.)

I woke up before I could try any of the new books, but if I dream about them again, I will report back. Meanwhile, if anyone has a copy of Allansia they don't want, let me know.
Scrawled unintelligibly by thekelvingreen at 12:00 pm