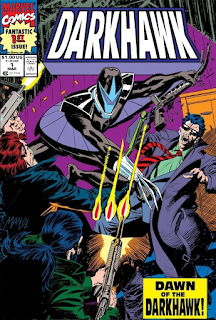 By complete coincidence, I'm looking at this a week after Marvel published a Darkhawk 30th anniversary special, which answers one question I had about this comic.

This first issue is very much an origin story, but there is a "created by Tom DeFalco" credit and the issue is written by Danny Fingeroth, all of which implies an earlier appearance. There is a preview in February 1991's Marvel Age #97 but it seems no one counts that, so yes, this is the character's first appearance. Happy 30th, Darkhawk!

I have read other comics featuring the character -- most recently, Infinity Countdown: Darkhawk because Death's Head is in it -- but they have all been later appearances, and I gather the character has had a bit of a conceptual and visual redesign since then, tying him to some of Marvel's cosmic mythos. Which is a good thing, because here at the start he is ill-defined and uninspired.

Part of the problem is that the storytelling is a mess. It manages to be both paced at a breakneck speed, to the extent that it feels like there are missing panels in the way it jumps from scene to scene, but also oddly devoid of actual content, because not much seems to happen. The Darkhawk suit is introduced, that's good. We see it shoot a laser thing. Okay, so that's a thing it can do. What is the helmet about? What does the single Wolverine claw do? What do the wings do? There's a mysterious tramp wandering about who seems to know what Darkhawk is but vanishes and that's a valid bit of mystery storytelling, something I'd expect to be left hanging and explored later. So too with the early appearance of the Hobgoblin. On the other hand, basic functions of the character design should probably be at least hinted at in the first issue, but it feels like they ran out of room and then you look back and realise that they had plenty of time and space, but wasted it somehow. It feels like that awful early-2000s trend of "decompressed storytelling" only a dozen years early.

I don't want the entire backstory in #1, but we can do better than "he is grey and has a laser" can't we?

We don't get much of a feel for Darkhawk's civilian identity either. He is an older brother -- maybe a teenager? -- and he has friends. I think that's about all we get. It's all so vague and again I don't want everything, laid out in the first issue, but there's a vast gulf between "everything" and "nothing" and they somehow manage to miss it. 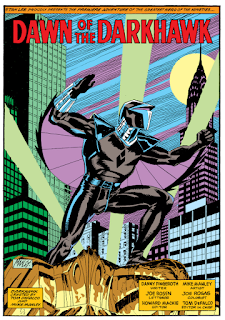 The visual design is soul-sapping too. He is grey. All over grey. Grey is difficult to make interesting and, well, they don't manage it. There is a chest logo of sorts, but it's tiny and black. Black on grey. Darkhawk does have his helmet, wings and claw thing to break up the block of grey, but it's not enough. Black Widow has a similar colour scheme around this time, with a grey bodysuit and metallic wrist things, but at least with her you've got the vibrant red of her hair to provide some contrast. Not so with Darkhawk, although who knows under that helmet?

Even the logo is uninspired. They could have got some sort of bird or wing motif in there, but no, let's just do block capitals with a perspective slant. Job done, let's go down the pub.

It's an odd comic. It seems to be going for gritty urban crime in tone, and Mike Manley draws it like that -- and well, to be fair -- but then a teen superhero turns up and shoots lasers out of his nipples. This should be a bit of a clash, but because the superhero has this grey, featureless design, that clash doesn't quite happen. Perhaps that was deliberate, but I don't have any confidence that it is, because it more feels like bored creators going through the motions.

I've given the comic a bit of a kicking here, which isn't quite fair because it's not bad by any means. The only dodgy bit is the pacing and the rest of it is fine, but it all feels so oppressive in its dingy dullness that I can't say it was good either. You want a brand new character to make a splash, but this is about as splashy as a puddle on a rainy day in Peterborough.

I give Darkhawk #1 two Cables.

Scrawled unintelligibly by thekelvingreen at 12:50 pm