Some Clever Pun About the Contra Games, or the Iran-Contra Affair, or Something

Contraband is a 144-page graphic novel from TJ Behe, Phil Elliott, Ian Sharman, and Cherie Donovan, with a cover by Marcus Hohl. I'm reviewing the 2008 edition from Slave Labor Graphics, but a new edition is being released in May 2021 by Markosia. I believe that the only major change is the cover; pictured is the new cover design. 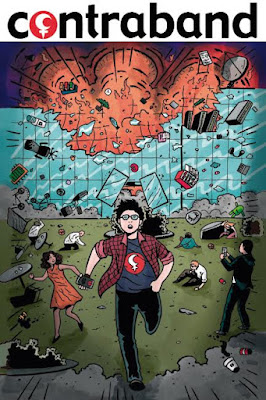 The graphic novel is set in what was probably an alternate future in 2008, but is more like an alternate present these days, in which all the buzz is generated by "citizen journalists" using their smartphones to record the world around them, freed from requirements foisted upon them by editorial departments, advertisers, or shareholders. With this democratisation of content comes a darker side, with the app/network Contraband chasing and encouraging sensationalist content, most often of a violent nature, and offering cash for ever more extreme footage.

(Isn't it weird that we still call it footage, even though video isn't measured in literal feet any more? I wonder if that term will ever go out of use?)

Contraband is too plausible to be science fiction, as aside from one notable exception, most of the technology is commonplace now, although it perhaps wasn't in 2008; Contraband itself is more or less TikTok, only eight years early, so that's some eerie prescience from Behe. It's also not quite a technothriller, because there aren't many car chases or explosions, although there are a couple of both. The most appropriate genre is probably some sort of modern noir, given how everyone and everything in its world is awful. It does remind me a bit of Black Mirror, but I hesitate to compare the two because (a) the original book predates the TV series by three years, and (2) I've always thought that Black Mirror was a bit rubbish, and this is much better.

(There's your quote: "Like Black Mirror, only not rubbish!")

The story follows Toby, a cafe worker and one of these citizen journalists, who one day records the wrong person and then gets drawn into a conflict between the creators of the Contraband network and the activists who see it as a social ill and wish to shut it down. It unfolds as a sort of low-key espionage thriller as Toby becomes a double agent, being pulled by both sides while trying to keep his head down and stay alive, and also find one of the activists, who has been kidnapped and is being tortured live on Contraband.

The art team give the book a lo-fi indie feel, which fits in well with the idea of all of this happening at a street level, below the noses of governments and big media corporations. A more flashy look would have probably been a bit of a stylistic clash, because it's a grubby story about a grubby world. The storytelling is clear throughout and the shifts from slower, talky scenes to the more energetic action sequences are well handled.

In terms of writing, the characterisation is good, in particular the "villain", Tucker, who comes across as a complete scumbag, as befits someone who runs a video-sharing network that encourages people to beat each other up in parks for money. The protagonist Toby is also well-written, stuck between powerful forces and forced to serve two masters; it would be an easy mistake to write him like an idiotic slasher movie victim, someone who could get out of the mess they are in if only they were less stupid, but it always feels like Toby is in an impossible situation with no easy escape. Charlotte, the kidnapped activist, is another character that could have been mishandled but works well, off-panel for most of the book as the unseen impetus for Toby's quest, but in true noirish tradition, it's not quite that simple, and from the very first pages -- and in flashbacks throughout -- we see that she is no weak-willed damsel-in-distress.

The plotting is also strong, with good use of flashbacks to add context and texture to the main kidnap storyline, and it all culminates in a perfect noir ending complete with twists and turns that upend things again and again, and force you to look at the characters in new ways, even as you turn the final page. The twists feel earned, too, even one final revelation that could have come across as arbitrary, but just about works.

Jarvis Stevens, the chief activist opposing Contraband, doesn't quite work as well. He feels a bit undefined in comparison to Tucker, and his pro-legislation stance appears to be portrayed as an inherent good, which feels a bit odd in a book that overall seems to want to be counter-cultural. I suspect the first is a deliberate choice to contrast the leaders of the two factions, but the latter feels a bit off; by the end of the book it's clear that there are no real heroes or villains, which makes Jarvis less of a shining white knight, but I'm not sure Behe makes the right moves to get there, and it feels less like a twist and more like a mis-step. NOt a huge one, I should clarify, and while it may distract a little, it doesn't harm the book.

The script is also overly wordy in a few places. You'll get a panel which looks like it's taking about five seconds of time but there are reams of text that would take five minutes to actually speak. In fairness, it only happens a couple of times and only in the first half of the book, but it does make a few scenes difficult to get through.

All that said, I like Contraband quite a bit. It's entertaining and interesting throughout, and delivers a satisfying ending that caps everything off in a perfect way; I've written enough things -- including reviews! -- to know that the climax is often the most difficult thing to get right. You can write 140 good pages, but if the last four don't work, then more often than not, the whole thing fails. That's not the case here. It's a bit of a cliché to say so when you're talking about this sort of subject matter but I am also impressed with how prescient the core idea is; in 2008 it probably came across as a bit of an oddity, but in 2021 it feels like sharp social commentary.

Anyway. Contraband good. Buy it if you like stories about the effects of social media on society, or you want to see how noir can be updated to the modern day without devolving into pastiche.
Scrawled unintelligibly by thekelvingreen at 4:16 pm