The Strange Case of the Phantom Militiaman

Having, er, slain a giant Thorek was now officially a giant slayer but he was still out of Fate Points so death continued to nip at his heels as the party travelled south from Middenheim to deliver the now purified bell clapper to Altdorf, the capital of the Empire. The slayer's flirting with oblivion has become something of an ongoing theme in The Enemy Within II: Tokyo Drift and that would continue as the party made their way to Altdorf.

It was the other dwarf in the group, the tin-plated dreadnought known as Magnar, who ran into trouble first. The party's first stop was the town of Delberz, three days south through the perilous Drakwald forest, and about halfway through the trip the road narrowed to cross a stone bridge. Upon that bridge stood a Warrior of Chaos clad in armour black as night; as the party approached the Warrior's deep voice intoned the ominous words "None shall pass."

Back when Robertus von Oppenheim was introduced the players groaned even though Warhammer Fantasy Roleplay has long been notorious for its rampant punnery; I told them at the time that there was better/worse coming up and this was it. Yes, I didn't add the black knight from Monty Python and the Holy Grail; he's in the book.

In a party of deadly killers Magnar fancies himself as the Fighter™ so he was the one who stepped forward to challenge the Chaos Warrior. The fight that followed was brutal as two skilled opponents clanged and chopped at each other. The dwarf had the upper hand early on -- because my dice rolling is appalling -- but the Warrior's greater endurance started to wear Magnar down and so a surreptitious signal was given and the mutant wizard Aelric unleashed a lightning bolt that punched through the Warrior's helmet and boiled his head.

The Warrior's body and armour dissolved into a black goo but his mighty broadsword remained, giving off all sorts of dubious emanations that gave Aelric the creeps. Nonetheless Magnar scooped up the blade and added it to his growing collection of fine murder aids.

The rest of the journey to Delberz passed without incident and the party stopped for a bit to ponder whether to continue by road or take the river; both would take about ten days but the river would be safer. Of course. Yep.

While in Delberz the party interrupted an epic conflict between a maid with a broom and a weird mutant rat and wondered if the Skaven from Averheim were back on their trail. They also heard about a series of murders in the town and sensing a potential reward being public-spirited individuals they promised the town's sheriff that they would investigate. A number of the town's most notable residents had been found disembowelled and their mouths stuffed with gold crowns; although it was clear that the murders were linked the sheriff had no other clues and was too busy with other events -- there was an implication of major criminal activity at the docks -- to investigate further.

The party soon discovered that all the victims had come into a fair sum of money and had all done so at about the same time; moreover they all had been members of the town's militia and had served in the same regiment in various conflicts. Two members of that regiment -- Ruprecht Machholt and Gawin Nachtman -- still lived in Delberz and were identified as the best leads; Machholt was holed up in his expensive town house and refused to admit the party until Aelric used his charm and wit -- his fleshless face doesn't affect his social skills, as long as he keeps his mask on -- to encouraged the terrified burgher to open the door.

Using threats of bloody retribution the party convinced Machholt to reveal that years before he and his regiment had discovered a ruined manor house during one campaign and that the cellars of the house contained a sizeable hoard of treasure; the soldiers agreed to share the wealth, all except Ludwig Frohlich, who argued for it to be returned to the authorities and threatened to turn the others in if they went ahead with their plan. Although the soldiers were friends, one among them convinced the others to kill Frohlich and hide his body so that the rest of them could be rich; Machholt was convinced that Frohlich had returned from his shallow grave to exact vengeance.

This seemed no less plausible than four-armed giant ratmen and an elf with a skull face so the party left Thorek and Drandruel to guard Machholt -- their players were absent and there's a concerted effort among the remaining players to keep the slayer alive, which given his profession is somewhat tricky -- while the rest went to Nachtman's cottage to warn him of his impending doom.

Upon arrival they found Nachtman already at the receiving end of a spear wielded by some sort of phantom resembling an Imperial foot soldier formed of shadow and smoke. The figure put up some resistance but couldn't last long against Magnar, Aelric, and Rudiger and soon fell; Nachtman himself was alive but not for long and with his last breaths confirmed Machholt's story.

Then the phantom soldier stood up and attacked them again. 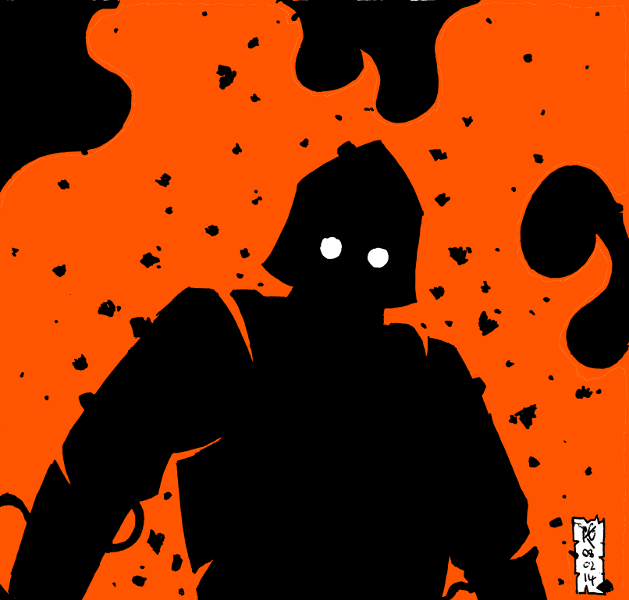 I had great fun with this fight as it was as much a puzzle as it was a brawl. The party didn't have much trouble putting the phantom down but its continued resurrections had them baffled and they tried holy water, fire, even confiscating its spear in their attempts to stop it.

The phantom arrived at Machholt's house soon after the party returned and turned up again at the sheriff's office once they moved Machholt there having arrested him for the murder of Frohlich, hoping that would appease the revenant. The sheriff suggested that she had some paperwork to do and so would leave Machholt with the players for a moment and that they should be careful as all sorts of accidents could happen while she was in the other room; this hint proved to be a bit too subtle for the player-characters, but they came up with their own solution.

They confronted the phantom and told it that Machholt would stand trial for his crimes in the morning and if justice was not served then the phantom could take its revenge on them. One of the advantages tabletop role-playing still has over computer games is that it encourages this sort of player ingenuity; the adventure had a number of resolutions written into the text but the idea that the player-characters would take on the murderers' moral debt was an unexpected one.

This pledge seemed to appease the phantom and it collapsed for what the player-characters hoped would be the final time. The next morning Aelric -- the town's mayor being unavailable, perhaps due to the aforementioned business at the docks -- presided over the trial of Ruprecht Machholt, found him and his cohorts guilty of murder and theft, and sentenced him to death. Magnar volunteered -- he has his eye on the Judicial Champion career -- to do the chopping and so justice was served.

Later that day the party hired a barge from the father-son team of Yan and Yan and settled in for a quiet voyage down the river Delb to Altdorf. On the first night they stopped at The Hooded Man -- not ominous at all, that -- for dinner but chose to sleep on the boat; they woke to found that they'd been robbed of a substantial sum of gold and in possession of a note from "OF" suggesting that they'd offended someone. The party suspected that their double-crossing of the thieves' guild in Middenheim had not been well received and were keen to set off again as soon as possible.

On the fourth day of the trip the boat stopped at the village of Mistheim, which was not a big village but even so the two Yans were certain that its population should have been more than zero. A quick scout of the settlement revealed signs of conflict as well as some sort of monument made of bones and gore; they had seen something similar before. Knowing now that servants of Chaos were about Rudiger agreed with Yan and Yan that everyone should return to the boat and press on but sensing a potential reward being public-spirited individuals Magnar and Aelric argued for the rescue of the villagers.

A few minutes later the player-characters -- minus Thorek and Drandruel, who were making sure that Yan and Yan didn't sneak off -- were deep in the woods following the trail left by the marauding beastmen. Along the way they passed a standing stone covered in arcane markings and splashed with blood; upon passing the stone Aelric felt invigorated and detected an increased level of background magic. A quick experiment revealed that the elf-mutant's magical abilities were increased while he stood beyond an invisible line marked by the stone; the wizard theorised that there were other stones in the woods and that they were somehow focussing and amplifying magic within a certain area.

Rudiger scouted ahead and came upon what looked like a dried river bed in which some beastmen had set up a camp. He counted about half a dozen of the Chaotic things but was disheartened to see what looked like a shaman among them as well as a number of caves nearby that were no doubt packed full of more beastmen. A clear invitation to get back on the boat and forget all about Mistheim then, were it not for the cage full of living villagers at the edge of the camp.
Scrawled unintelligibly by thekelvingreen at 3:07 pm

Email ThisBlogThis!Share to TwitterShare to FacebookShare to Pinterest
Labels: games, report, stuff that I drew, The Enemy Within, Warhammer, WFRP